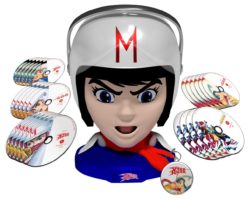 READY SET, GO! GO! GO! I have always loved “Speed Racer” since I was young kid! The show is also probably one of the first Japanese cartoons at the time that I watched, followed closely second by “Dragon Ball” series. Have the complete series on Blu-ray is totally an awesome thing but having a huge Collector’s Edition is even better. With the show celebrating it’s 50th anniversary this Collector’s Edition will come complete with Speed Racer, Mach Go Go Go, and Mach Go Go Go: Restart in the first-ever official U.S. release of the Japanese audio.

Official Premise: Speed Racer dreams of becoming a professional racer. When meddling crooks keep him from the finish line, he finds a way to make it through. An endearing classic since 1967, Speed Racer has captivated audiences from every corner of the globe. Preserve one of the most beloved racing shows of all time and share it with generations to come. 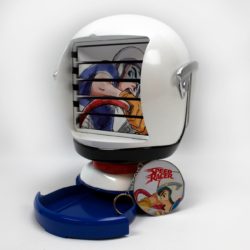 I have to admit though, I wasn’t all happy with this release. The Collectible Speed Racer Bust comes with Sound Effects, which is cool but honestly you can barely hear it. If you are breathing loud its so slow. I think this is a fail because you could have easily juiced up the sound board a bit. Hopefully mine is just defective and they are all not like this. Second is the price, this product was original retailing for near $300 bucks, which is A LOT! Even for a collectible.

Funimation has delivers the technical specs here. The 1080p transfer is solid for the includes episodes. The aspect ratio is includes is the original 1.33:1, which is going to make fans happy. Also both the English dub and original Japanese tracks come stocked with Dolby TrueHD 2.0 track. This are impressive tracks and since, this is the first time for the US to receive the Japanese audio, it is a real treat for sure!

As mentioned above, this is set includes the complete 1967 Speed Racer Collection and the 1967 Mach Go Go Go Collection on both DVD and Blu-ray. The 1997 Mach Go Go Go Restart Collection is only featured on DVD here. Also included here is a collectible Speed Racer Key Chain and a bonus 2017 Interview with Trixie, voice actor Connie Orr. So overall, I am excited every time I walk in my office and see this bust sticking out on my shelf, so in that sense, I am one happy Speed Racer fan!