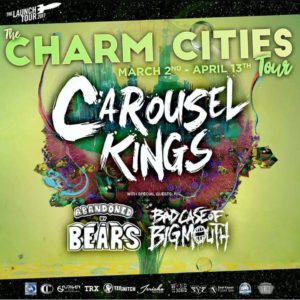 Victory Records artist Carousel Kings brought their “Charm Cities” tour to the impressive Ground Floor 2.0 venue in Williamsport, PA on April 8th for a night of high energy punk rock. The quant Pennsylvania town which is best known as the home of the Little League World Series now has another claim to fame as the Ground Floor 2.0 venue boasts a fun and safe environment for all concert goers while providing top notch sound, lighting and amenities for its performing artists making for a great experience for everyone involved and the “Charm Cities” tour was no exception.

Kicking of the night was the Elmira, NY based band Take Two. The five piece group whose sound could be described as progressive punk rock performed a hand full of original material including a few songs off their recently released “Weekend Warriors EP”. The band did a great job warming up the crowd and received a hefty round of applause as their set came to a close. Michigan natives American Arson would be up next and though not originally part of the shows line up the band consisting of only two members guitarist/vocalist Evan Baker and drummer Jesse Gentry put forth a sound and style that would make full sized bands shake in their boots. The duo performed a brief, high intensity set which featured songs of their latest “Waymaker” EP. Taking the stage next would be NJ native Bad Case of Big Mouth or simply just “Bad Case” the band worked the stage like seasoned professionals as the bands vocalist and dual guitarist whipped up a solid helping of pop-punk goodness. In the direct support slot for the nights show was Sweden’s own…yes I said Sweden easy-core band Abandoned By Bears. The band which sports dual vocalist brought a heavier element to the shows lineup which contrasted nicely with the other bands on the bill as it set the stage nicely for tour headliners Carousel Kings. Flanked by numerous lighted pillars Carousel Kings would close out the night performing a variety songs including a handful from their latest release “Charm City”. It had been a little while since I had seen the guys perform live and since that time the band has undergone some lineup changes however they were just as solid as the previous incarnations.

Very rarely do you come across a tour and venue that are both equally great. However, in the case of the “Charm Cities” tour stop at the Ground Floor 2.0 both venue and artists clicked on all levels. The bands on the bill were all very personable and thankful to those in attendance and the same could be said for the venue staff as they treated every person that came through the door with the utmost respect. Though the “Charm Cities” tour comes to close on April 13th do yourself a favor and check out each of the bands on this line up as each one will not disappoint.