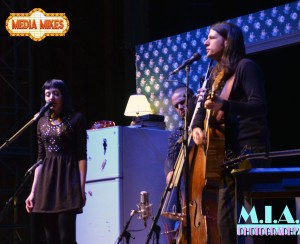 Singer songwriters Jessica Lea Mayfield and Seth Avett made a stop in the quaint town of Glenside, PA on March 14th to perform at the intimate Keswick Theater. The duo is out on a brief 13 show tour in support of their recent release titled “Seth Avett and Jessica Lea Mayfield sing Elliot Smith”. The album a 12 song showcase of some of singer/songwriter Elliot Smith’s best works is the first collaboration between Mayfield and Avett and hopefully not the last as the magic heard on the album was flawlessly created on stage.

About 40 miles outside of Philadelphia sits the historic Keswick Theater. The theater which originally opened on Christmas Eve in 1928 was the perfect setting for the night’s performance as the vintage theater seemed a perfect host for Avett and Mayfield’s sound which was made up off the two sharing singing and guitar duties along with Paul Defiglia on stand up bass. Though small in their approach the trio’s sound instantly filled the theater and sounded as good if not better than some of the recorded studio tracks. Songs such as “Baby Britain”, “Between the Bars” and “Twilight” were definite highlights of the set as were “I Me Mine” originally by The Beatles and a great version of Bob Dylan’s “Just Like a Woman”. The set also featured 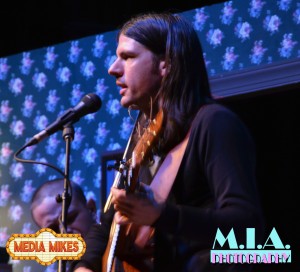 several songs from Mayfield and Avett’s personal catalogs along with a brand new track from Avett titled “Lines On My Face”.

The night’s performance was certainly very solid and sounded great however before you knew it, it was over. Clocking in at less than 90 minutes (which included the band leaving the stage prior to the night’s encore) there was certainly plenty of time left for more material especially since the show features no opening act. With the shows being billed as “An Evening with Seth Avett and Jessica Lea Mayfield” I guess I was expecting a little more. Don’t get me wrong 21 songs is not a short set list by any means however when most of those songs come in at 4 minutes or less and the artists(especially Avett) have a fair amount of material they could pull from to make these13 shows something really special however don’t it certainly was a bit disconcerting.