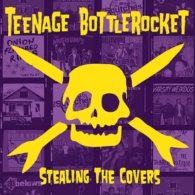 Teenage BottleRocket’s brand new album and their return to Fat Wreck Chords is complete! “Stealing The Covers” is the latest offering from the 4 piece punk band hailing from Laramie, Wyoming. Pulled from catalogs of bands TBR has toured with over the last 17 years the groups most recent offering is a unique collection of upbeat, tongue and cheek cover tracks that follow suit with the bands previous releases.

Having first heard about the possibility of this album during last years Warped Tour I was more than ready to check it out when the opportunity arose. Right off the bat I noticed that this wasn’t going to be just another punk cover album as while looking at the albums track listing a lot of the song titles where foreign to me as were the bands who originally performed them. No matter, I forged ahead and what I ended up finding was a fun, fresh and energetic album worth listening to multiple times over. Tracks like “Back and Forth”, “Robocop Is a Halfbreed Sellout” and, “Gay Parade” had just about I look for in a solid pop-punk tune.

From humorous lyrics and subject matter to catchy sing along choruses played with a Ramones like fury Teenage Bottlerockets “Stealing The Covers” is a great listen. Don’t let the bands decision to choose more obscure tracks cloud your judgment as I found not knowing some of the music only added to the appeal of the record and gave it a freshness other cover albums lack.

Track Listing:
1. The Way I Know (Varsity Weirdos)
2. Back and Forth (Hollywood Blondes)
3. College Town (Juke)
4. Don’t Go (The Scutches)
5. Robocop Is a Halfbreed Sellout (Sprocket Nova)
6. No Hugging No Learning (HEAD)
7. Shit Fuck God Damn (Artimus Maximus)
8. Gay Parade (The Gullibles)
9. It Came from the Radio (The Blendours)
10. Alien Motion Technology (The Mugwumps)
11. Hat Nerd (The Four Eyes)
12. My Very Best (The 20Belows)
13. I Kill Butterflies (Onion Flavored Rings)
14. Why the Big Pause (The Punchlines)