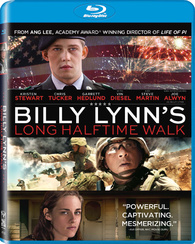 Ang Lee’s latest film, “Billy Lynn’s Long Halftime Walk” was one that came and went so fast, but no one even noticed. Especially with a supporting cast including Co-starring Kristen Stewart, Chris Tucker, Garrett Hedlund, Vin Diesel and Steve Martin. I mean are you serious? This film was also the first 4K presentation of the film to be showed at 60 FPS…but watching it on Blu-ray you are missing most of the “experience”. The 4K Ultra HD (with 3D) is where this film would shine more…but we did not receive that version to feature. If you can get your hands on that edition, it is worth watching one. Not anything that I would see again but I did enjoy the performances.

Official Premise: The story is told from the point of view of 19-year-old private Billy Lynn (Joe Alwyn) who, along with his fellow soldiers in Bravo Squad, becomes a hero after a harrowing battle in Iraq and is brought home temporarily for a victory tour. Through a sequence of flashbacks, the truth about what really happened is revealed – contrasting the realities of the war with America’s distorted perceptions of heroism.

The standard Blu-ray’s 1080p transfer with DTS-HD Master Audio 5.1 surround track are still both impressive not faults there at all but when you look at the potential of this film it is like watching it on VHS tape. You missing a lot of the purposeful detail. The special features are not great either. There are a few deleted scenes and four featurettes included about the production. Again, the 4K Ultra HD disc has more content.