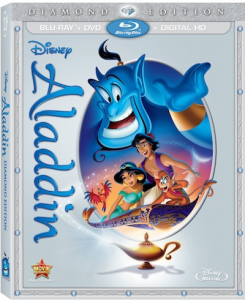 “Aladdin” was and will always be one of my all-time favorite Disney films. I saw this film in theaters with I was a kid and fell in love. I was also a huge fan of the Sega Genesis game and TV series growing up as well. There is just so much magic packed into this film. The music. The animation. Robin Williams. It is simply perfect. Watching this film definitely makes me miss Robin a lot! He was a comedy genius in his prime and luckily will never be forgotten! My favorite part of this film arriving on Blu-ray this year is that I am able to now introduce it to my 3 1/2 year old daughter, who has no become quite obsessed with it as well. So my job as a dad is done as far as I am concerned. This is a must own for any Disney fan, PERIOD!

Official Premise: Climb aboard for a magical carpet ride with nonstop laughs, action-packed adventure and Academy Award(R)-winning music that will make your heart soar (1992: Best Music, Original Song, “A Whole New World,” Original Score). Now for the first time ever, a whole new world of Disney’s ALADDIN is revealed in a whole new way on Blu-ray and Digital HD — with never-before-seen bonus! With the help of a hysterically funny, shape-shifting, 10,000-year-old Genie, street-smart commoner Aladdin and clever, confident Princess Jasmine join forces against the evil sorcerer Jafar to put an end to his plans to take over the kingdom!

Disney released this Diamond Edition as a combo pack with a Blu-ray, DVD and Digital HD copies included. Let me tell you I was simply blown away with the animation in high definition. The colors are just unbelievable. Everything about this movie just shines in 1080p. I am glad they waited this long to release this film because it looks like they really gave this film some good loving. Same goes for Disney’s DTS Master Audio 7.1 track, which perfectly showcases the songs that we all know and love for all those years. Simply perfect. No other way to describe it, honestly.

The special are fantastic editions to this already wonderful Blu-ray. I absolutely loved watching “The Genie Outtakes”. Robin Williams bloopers with his famous character are magically. “Genie 101” features Scott Weinger (the voice of Aladdin) as the host discussing the character. “Ron & John: You Ain’t Never Had a Friend Like Me” features the two directors, John Musker & Ron Clements, talking about the film. “Aladdin: Creating Broadway Magic” focuses on the stage play with host Darren Criss. “Unboxing Aladdin” explores Easter eggs and hidden secrets with  Joey Bragg from Disney Channel’s Liv & Maddy. Lastly there are also ALL classic bonus from the original DVD releases. There are also some extras bonus extras included if you use Disney Movies Anywhere.