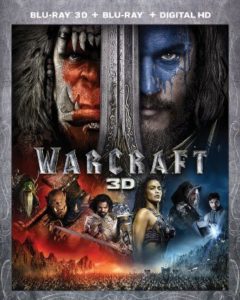 There is no shortage of talent behind this film. It was directed by Duncan Jones (Moon, Source Code) and stars Travis Fimmel (“Vikings,” Maggie’s Plan), Paula Patton (Mission Impossible: Ghost Protocol, Deja Vu), Dominic Cooper (Captain America: The First Avenger, Need for Speed) and Ben Foster (Lone Survivor, 3:10 to Yuma). The film was not a big hit domestically but worldwide it did pull in a pretty penny. I loved it and I would recommend it highly for an action packed wild ride. I hope they continue the series for sure, since it is setup so well for future installment.

Official Premise: The peaceful realm of Azeroth stands on the brink of war as its civilization faces a fearsome race of invaders: Orc warriors fleeing their dying home to colonize another. As a portal opens to connect the two worlds, one army faces destruction and the other faces extinction. From opposing sides, an unlikely group of heroes is set on a collision course that will decide the fate of their families, their people and their home.

If the games fans would have given this movie a chance they would have realized how epic and awesome it is. The visual effects on this film were simply amazing. I LOVED the 3D effects, in fact they were the best that I have seen in a movie since “Edge of Tomorrow” with Tom Cruise. It literally blew me away. The Blu-ray transfer looks outstanding on my TV and the 3D was extremely effect. The colors were also perfectly displayed and delivered a great viewing experience.

The Blu-ray 3D combo pack also comes with a standard Blu-ray and a digital HD copy. The special features are loaded up with over 90 minutes of bonus content, including deleted scenes, an exclusive stop-motion Warcraft comic, and several behind-the-scenes looks at stunts, visual effects, story origins, and more. First up here have “WARCRAFT: Bonds of Brotherhood”, which is an awesome never-before-seen motion comic. “The World of Warcraft on Film: The “World of Warcraft” focuses on the world that is created for the film and how it differs from the game and it focuses on the talent as well as the outstanding VFX.

“Outfitting a World” gives costume designer Mayes Rubeo the spotlight to discuss how the film’s weaponry and armor were created. “The World of MOCAP” discusses the creation of the Orcs. “The World of Stunts” looks deeper into the VFX and fight scenes in the film. Lastly there is a featurette on Madame Tussauds, the original teaser from San Diego Comic-Con in 2013, as well as a few deleted scenes and gag reel included.