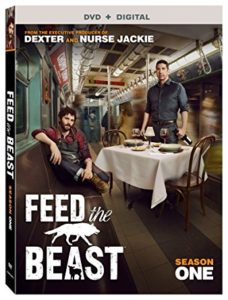 “Feed the Beast” is yet another example of the post-“Friends” curse that has been haunting its star David Schwimmer (although he was good in “American Crime Story”). With a show coming from the minds of the people behind “Dexter” and “Nurse Jackie”, I expected much more. The series also co-starred one of my favorite actor Jim Sturgess (Across the Universe, Cloud Atlas). Alas, it was nixed after just the first season. Overall, I enjoyed it. Wasn’t the best thing that I have seen on TV but I also don’t think it deserved to get canceled so quickly especially when “Friends” co-star Matthew Perry still has his much harder to watch remake of “The Odd Couple” on the air. Feel like saving another show Netflix?

Official Premise: For Tommy (Schwimmer) and Dion (Sturgess), two friends on the brink of losing everything, a dusty pipe dream of opening an upscale restaurant in their hometown of the Bronx is all they have left to turn their lives around. Together, Tommy and Dion take on the insanity of the New York restaurant world, navigating its underbelly of petty criminals, corrupt officials, and violent gangsters.

This show is available on Blu-ray and DVD but I was only provided with a DVD for the source of this review. The DVD does come with a Digital HD copy of the season, which is a bonus for sure. There are three featurttes included, “Fate, Friendship and Food: Crafting Season 1”, “The Food Behind The Fancy” and “Building The Beast”, which features cast/crew reflecting on the season, their characters and how it was brought to life. Lastly there are also audio commentary track with the cast & crew on few select episodes, so at least we have a little repeat value here.