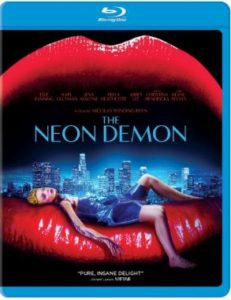 Nicolas Winding Refn is a director that is not for everyone but for those that love him really love him. I was a huge fan of “Drive” and his style just speaks to me personally. So when “The Neon Demon” came around I went in completely blind and was absolutely blown away with this film. Elle Fanning is absolutely breathtaking as a person as with her performance. I hardly blinked when she was on screen. Jena Malone, Bella Heathcote, Abbey Lee are defiantly evil and even Christina Hendricks and Keanu Reeves pop in throughout. Reeves in particularly is one hell of a creep and nails it perfectly. Cliff Martinez delivered what is easily my favorite score of the year, which made this film work just so well! I found myself holding my breath and unable to look away at this marvel! If you enjoy something that isn’t a sequel or remake/reboot, this is a must see!

Official Premise: The Neon Demon is a sumptuous horror-thriller, set in the highly competitive and often vicious world of fashion modeling, where the term “eat their own” takes on a decidedly new meaning. When aspiring model Jesse (Fanning) moves to Los Angeles, her youth and vitality are devoured by a group of beauty-obsessed women who will use any means necessary to get what she has.

“The Neon Demon” is literally one of the most beautiful films I have seen. The 1080p transfer is fantastic! I would have loved to see this film get a 4K release! The DTS-HD Master Audio 5.1 surround works absolutely perfectly with my electronic soundtrack by Cliff Martinez (which is also my favorite score of the year). Martinez has scored Refn’s previous films “Drive” and “Only God Forgives”. Unfortunately, the special features are rather light. The audio commentary with Refn and Fanning is a must listen if you like the film but it is only followed by two short featurettes: “Behind the Soundtrack of The Neon Demon (05:08)” and “About The Neon Demon (01:12), way too short to fully get the behind-the-scenes feature.