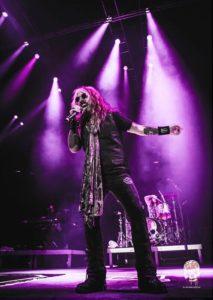 For over 20 years singer/guitarist John Corabi has been recording and performing with a number of hard rock acts ranging from Union and ESP to being the replacement for Motley Crue vocalist Vince Neil for a period of time in the mid 90’s. Since that time Corabi has embarked on a successful solo career and also joined the group The Dead Daisies a group whose current lineup also includes Marco Mendoza, Doug Aldrich, Brian Tichy and David Lowy. Media Mikes spoke with John recently about The Dead Daises upcoming album titled “Make Some Noise” which is due out on August 5th and also about the groups upcoming U.S. Tour with Kiss.

Adam Lawton: You joined The Dead Daisies in 2015. What has the first year of being in the band been like for you thus far?

John Corabi: It has been crazy! I got the call originally from Marco as they had been working with someone prior to me and things weren’t working out. They had plans to go over to Cuba and they asked me if I would be willing to go with them. I went and did that and we had an amazing time there. I think that was sort of a way for the guys to feel me out a bit. I think they wanted to see if I was a good fit or not. After that trip I got a call from the guys asking if I wanted to go to Australia and do an album. We got together in March of last year and wrote and recorded the “Revolucion” album in about 33 days. After flying home from that I did some solo shows with my band and the next thing I know I was in California doing a video with guys and also rehearsing for some upcoming European shows with Kiss. We then came back and did a run with Whitesnake after which we went back to Australia with Kiss. We then did the Kiss cruise and went back to Europe again but this time with Whitesnake. I got home at the end of December and by January of this year we were back in the studio working on the new record “Make Some Noise”. Things have been pretty busy. When I’m not out with The Daisies I’m out with my solo band which has a live album coming out in October.

AL: What has the addition of Doug Aldrich been like for the band?

JC: When Dizzy Reed and Richard Fortus got the call to go do the Guns N’ Roses tour we reached out to Doug. He is a really great player who has just jumped right in. I have known Doug since he was about 17 as we grew up in Philadelphia together. With this band it’s about friendship as we all hang out and have known each other for a long time. Doug was able to step in to that as he has a great sense of humor to go along with his amazing playing and song writing ability. With this new record we wanted to go in and do a straight forward 70’s era type rock album. All the guys in the band have similar influences so for us to be able to go in and do that with the addition of Doug was really great.

AL: How did the writing for “Make Some Noise” compare to that of your previous album with the band? 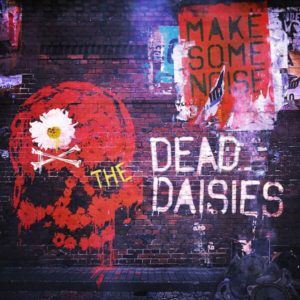 JC: When you bring in a different member things do change a little. Doug fits in with everyone and we all have similar interest so that certainly helped. I think the biggest difference with the new record wasn’t really anything with the guitars but it was more so the fact that we didn’t add keyboards this time around. That allowed the guitars more room to be a little more aggressive. David Lowy made that decision as doing a band similar to the style of AC/DC was his original idea for the band. When Richard and Dizzy left it was decided not to replace them so Doug and David had a little more space to expand on their parts in each song.

AL: Do you prefer working on material that is more stripped down and straight forward as opposed to something with a lot of layers and instrumentation?

JC: I think the song really dictates how much or how little it needs. There was one song we did that we didn’t end up putting on the album that I want to put on my new solo album that had a lot of stuff going on within it. When we looked at what we had this song didn’t really fit in with the others because they are all very straight forward. Again the song really decides what it needs in the way of production. I think back to the first album I did with Union which is a pretty stripped down album as that’s what most of those songs required but there is one on that recorded titled “Let It Flow” which has a bunch of cool over dubs and instrumentation on it because that’s what it sort of dictated.

AL: How was it working with producer Marti Frederiksen this time around?

JC: I had known Marti since he opened for my band The Scream in the early Nineties. I always sort of kept an eye on his career. I realized when he started working with groups like Brother Cane and Aerosmith that he was going to do a lot of cool stuff. We were looking for not just a producer but also someone who understood the writing process and would actually listen to what we were doing with a fresh set of ears. Marti was very open to suggestions throughout the process. We have all been making records for quite some time now so things worked well. We would just record things and if for some reason if something didn’t work we would just take it out after the fact. Marti was great in that he knew when to reel us in and also we to let us keep going. It was a two way street that worked pretty effortlessly.

AL: Can you tell us about the bands upcoming tour with Kiss and any other plans you and the band have scheduled?

JC: We start in the states with Kiss on August 10. Those guys have been really great to us. The shows are going to be very high energy. I am not sure how long we are going to be playing just yet but no matter how long we play its going to be pedal to the metal. We plan to do a mix of both old and new material along with a few covers to get the crowd riled up. That tour goes through mid September then we have a headlining show set in Los Angeles. After that I start rehearsals with my solo band and then we go out on the Monsters of Rock Cruise. From there The Daisies head over to Japan for the Loud Park Festival and we are booked all the way through December. We will be hitting a bunch a places all over.

For more info on John Corabi and The Dead Daisies be sure to head over to http://www.thedeaddaisies.comand also www.johncorabimusic.com