Puikkonen is the drummer for the Finnish bluegrass/rock/metal band Steve ‘N’ Seagulls. The group is set to release their debut album title “Farm Machine” which is made up of bluegrass renditions of songs like Iron Maiden’s “The Trooper” and Guns n’ Roses “Paradise City” to Led Zeppelins “Black Dog”. The group which also consists of Irwin Remmel, Pukki Kaalinen, Hermann and Wild Till Hiltunen will be performing on stages across Europe this summer and will soon be coming to the U.S. Media Mikes spoke with Puikkonen recently about the group’s creation, the new album and the group’s unique name.

Adam Lawton:  How did the band come together and what is the story behind the group’s name?
Puikkonen: At the beginning there was this desire of changing the routine. Most of us had been working as professional musicians for years in party/dance bands and needed to do something different and new. First we started to work on this country/western theme but over the years it took shape of something with a strong bluegrass influence but still wasn’t labeled in any specific genre. The name of this group was invented by the girlfriend of our banjo player Herman. If I remember it right they were waiting at a traffic light in Jyväskylä, Finland trying to come up with a decent name for the group.

AL: Was the idea to cover popular rock/metal songs something that was talked about from the start?
Puikkonen: At the beginning the main idea was to cover popular songs in spite of just one specific genre of music. Actually the very first arrangement we ever did was Lady Gaga’s song “Pokerface”. Rock/metal songs came along a little bit later when we realized that it was more fun and challenging to play. We had played some of the songs during our live shows and audiences really enjoyed it so we wanted to concentrate on doing a whole set of rock/metal 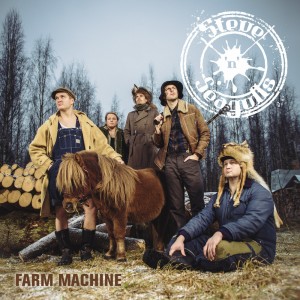 AL: How did you go about picking the songs that make up “Farm Machine”?
Puikkonen: The schedule of making the album was quite busy so the decision was easy to make. We picked just picked out the songs that we thought had the best arrangements.

AL: Were there any songs that were recording which did not make the albums final cut?
Puikkonen: There were actually two. I’m not sure if they are going to be released as bonus material but you can sometimes hear them in our live sets.

AL: What type of tour plans do you have in place and do they include the United States?
Puikkonen: This summer we are going to be playing all over Europe. Next fall we are putting together the plans to come to the U.S. We actually have one confirmed gig so far however we can’t announce it just yet. As soon as we have everything put together for the U.S. run we will be sure to let everyone know.