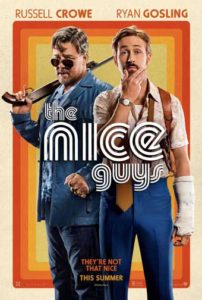 1977. A young man sneaks into his father’s bedroom and removes a magazine from underneath the bed. He takes it to his room and begins studying the curves of a young lady named Misty Mountains. Suddenly a car screeches outside. The boy hears the crash and goes out to investigate. Who is the driver? Old MM herself.

Outrageously funny from start to finish, The Nice Guys is a period piece co-written and directed by Shane Black, creator of the Lethal Weapon series. Like those films, the story rests on the shoulders of two incredibly gifted dramatic actors given a chance to be funny; Russell Crowe and Ryan Gosling. Their chemistry comes across from their first scene together and the film is much richer for it.

Jackson Healy (Crowe) is a leg-breaker. If someone is bothering you and you want them to stop he’s the man you call. Currently he has accepted the task of protecting a young woman named Amelia (Margaret Qualley). Holland March (Gosling) is a private investigator and single father whose latest case has him searching for a young woman named Amelia. Things go progressively from bad to worse for both men before they realize that they need to team up to get to the bottom of things. As they say in the funny papers: hilarity ensues.

I’ve always loved Shane Black as a writer. He has written some of the funniest scenes in some of my favorite films, including Lethal Weapon, The Last Boy Scout and The Last Action Hero. He also wrote and directed the very highly underrated Kiss Kiss Bang Bang. Here he creates two more indelible characters. With his ever present cigar and rumpled clothing, Jackson Healy (sounds more like an insurance company) is the tough guy with a heart whereas Holland March, who ensures a negative outlook on life by sporting a tattoo that reads “You Will Never Be Happy,” is the wise-ass who loves his precocious teenage daughter Holly (a very well-cast and wise beyond her years, Angourie Rice). You never question why Holland takes Holly with him on dangerous cases. You just realize that she is his partner in everything. The two leads play off each other perfectly. Crowe is ruff and gruff while Gosling sometimes comes off as an air-headed fool. In fact, once scene has him sputtering and mumbling so much that you would have thought he had channeled the spirit of Lou Costello.

Period wise, the film gets high marks for highlighting the fashion and art of the era, even if some of the items featured are a year or two off in context. A great billboard advertising Jaws 2 would have been out in 1978 while Rupert Holmes’ hit “Escape (the Pina Colada Song) didn’t hit the charts until 1979. That being said, these are minor quibbles with one fantastically funny film.