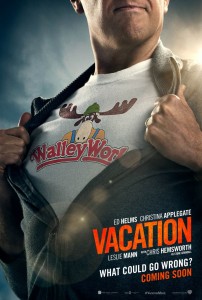 There’s a scene in the new film, “Vacation,” where one of the young sons of a now grown-up Rusty Griswold tells his father, “I’ve never even heard of the original vacation. Rusty’s response: “Doesn’t matter. The new vacation will stand on its own.”

Well, I’ve heard of the original. It’s a minute shorter and a heck of a lot funnier.

For the uninformed, 1983’s “Vacation” told the story of the Griswold family and their attempt to spend a family vacation at the Disneyworld-esque amusement park known as Walley World and the many mishaps that befell them on the way. In this version, it’s older son Rusty (Helms) who decides to rekindle that old feeling by taking his wife and sons to see the famous Moose. Along the way they stumble onto toxic waste, learn that Mrs. Griswold (Applegate) had a hell of a good time in college and discover that, despite all that can (and does) go wrong, dad’s heart is always in the right place.

What slows the film down some is Helms, who usually excels in supporting comedy roles. As the lead here, he doesn’t really bring any energy to the role. Chevy Chase’s Clark Griswold had a way of making Walley World seem like it really WAS the greatest place on earth. Helms just seems to think everyone already knows it. I would have much rather seen the original Rusty, Anthony Michael Hall, who still acts (he was so good in the “Dead Zone” television series) show up and bring have some fun. It’s not that the film isn’t “funny,” it’s that it isn’t FUNNY! The situations here are mostly too wild to laugh out loud. Here’s it’s a lot of nervous giggling and hoping that the next gag will be as funny as Helms and company try to sell it. The supporting cast does better, laugh wise, with Leslie Mann shining as the now grown-up Audrey and Chris Hemsworth shining as he plays a rural weatherman with a six pack abdomen and a little more than that packed below. He is truly unrecognizable and a hoot to boot.

This summer, give your new vacation a look if you’re really looking forward to it. Otherwise, sit back and remember how good the first “vacation” was!

One Reply to “Film Review “Vacation””