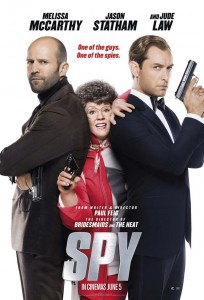 As much as I love Melissa McCarthy, I learned with last summer’s “Tammy” that she is so much funnier when surrounded by a great comedic cast.  Nothing against Susan Sarandon but I think the last time I consistently laughed at a film she was in was 1977’s “The Great Smokey Roadblock!”  That being said, with the cast appearing on-screen with Ms. McCarthy in “Spy,” she has herself another classic.

When the film begins we are introduced to the suave Bradley Fine (Law), the kind of secret agent that pauses to make sure his hair looks good after he gets physical with the bad guys. But, as everyone knows, you’re only as good as the people around you, and Fine is working with one of the best – Susan Cooper (McCarthy).  Coop’s job is to watch Fine’s back electronically and talk him through his mission, alerting him to on-coming baddies and the closest secret exit.  While working on a case together something goes horribly wrong and Fine is killed.  Susan is devastated.  However, when her agency needs someone to go out into the field – someone unknown to the enemy – Susan is given the chance.  World diplomacy may never be again.

A true comedy adventure, “Spy” is Melissa McCarthy at her best.  There are very few comedians, man or woman, that have her physical and comedic skills.  As she frequently changes disguises (and names), she becomes that character completely.  Again, she is aided by a great ensemble cast, including Law, Rose Byrne (her “Bridesmaids” co-star), Allison Janney, Bobby Cannavale and British funny lady Miranda Hart.  But the comic secret-weapon here is action star Statham, who plays an over the top version of his normal screen hero.

The script, by director Feig, is full of classic situations, both comedic and dramatic.  Some of the set pieces, including car chases and gun battles, are well staged.  The fact that he is directing and co-writing the upcoming “Ghostbusters” re-boot tells me that film is in more than capable hands.