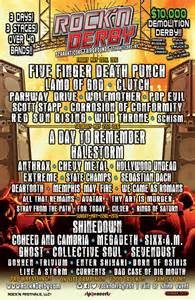 Upstate New York came alive on May 20th- 22nd as it hosted the inaugural “Rock N’ Derby” festival in the humble town of Shaghticoke, NY. Despite only being in its infancy the three day event offered a sprawling layout and variety of activities from professional wrestling and demolition derby’s to performances by some of today’s biggest artists including Five Finger Death Punch, Lamb of God, Halestorm, Shinedown and Megadeth.

With more and more multi-day festival popping up around the country it’s hard to figure out which ones are the real deal and which ones are merely just jumping on the band wagon. I am here to tell you that “Rock N’ Derby” is in fact the real deal. Despite being in a rather remote location which require traveling a variety of back roads the 3 day festival was easily one of the most enjoyable concert going experiences I have had. The festival offered plenty of room to move around, ample vendors and facilities including three well placed stages that didn’t require a lot of walking back and forth. To top it off the sound at all three stages was top notch the entire weekend. Though we weren’t able to be on hand for the events first day we talked with plenty of people in attendance who stated that the day’s events were highlighted by some killer performances including those by Lamb of God, Clutch and Five Finger Death Punch. Knowing all of those bands bring incredible live shows I’m sure they set the bar for the rest of the weekend. The main stages for day two of the event kicked off around 2pm with an intense set by the Ohio metal-core band Miss May I. Vocalist Levy Benton and company did an impressive job early in the day setting the standard for those who followed. As we bounced back and forth between the two main stages (the Derby Stage and the Rock Stage) we caught some really great performances by acts such as All That Remains, Chevy Metal featuring Taylor Hawkins of the Foo Fighters and as the day shifted to night Halestorm who put on an impressive set which included a full scale demolition derby taking place in the near fore ground. Closing out the night on the Derby Stage was the always energetic A Day to Remember. The band hit the stage with bursts of giant multi colored confetti and dozens of beach balls which bounced between the stage and crowd. The band sounded great and was very fun to watch as they played to one of the larger crowds of the day. Closing out things on the Rock Stage were thrash legends Anthrax. The NY natives also played before a very large crowd as they shredded through some of their classic back catalog which included songs like “Antisocial”, “Got the Time” before ending the night with “Caught in a Mosh”.

The main stages on the third and final day of the festival started up around 3pm with the hard hitting Trivium commandeering the Derby stage for an hour long set which helped re-energize the crowd from the previous day’s undertakings. Shortly after the opening of the Derby Stage the Rock Stage would be opened by none other than Dokken. Though only Don Dokken and Mick Brown remain from the bands classic eighties line up newer members guitarist Jon Levin and bassist Chris McCarvill handled their duties with ease as the band performed their hour long set. Aside from the days headliners the biggest talk around the grounds on Sunday was the performance of Ghost. The masked Swedish occult themed metal band played an incredible set that not only excited the festival crowd but also conjured up a wind and rain squall that added a different element to the bands theatrical performance. With the weather subsiding shortly after Ghost left the Derby Stage Nikki Sixx and Sixx A.M. got things going on the Rock Stage performing to a slightly dampened crowd. For me the performance matched the poor weather as they were one of the only acts over the three days that didn’t sound good. Sixx’s bass dominated the mix making the rest of the band barely audible and sent us back to the Derby Stage quicker than expected. Coheed and Cambria would take the Derby stage around 7pm putting on a stellar performance. The band was extremely tight making their intricate songs sound as good if not better than the studio recordings. It was great to finally here songs like “The Hardsell” and “A Favor House Atlantic” live as I had up until this day been unable to catch the band live. Needless to say they did not let me down. As the festival slowly started to come to a close Megadeth would be the last artist to take the Rock Stage where despite finding out about the passing of long time band member Nick Menza only a few hours before the group performed like true professionals. Mustain and his crew played a mixture of new and older material including “Hangar 18” and “The Threat is Real” prior to pausing and taking a few somber moments to recognize Nick’s passing. After a heartfelt moment of silence the band closed out the night and the stage with three of their more popular songs “Symphony of Destruction”, “Peace Sells” and “Holy Wars…The Punishment Due”.

While Shinedown was still holding court on the Derby Stage we made our way through the various camping locations and parking lots. Despite the large number of people at the festival things still remained uncluttered and in control. Festival goers moved freely out of the gates as did cars out of the lots. This was something I could greatly appreciate as anyone who has been to a concert of this size knows getting in and out can be one of the worst experiences ever. From our stand point “Rock N’ Derby” was a really fun and well organized event. Great acts, great vendors and a sizeable venue with ample facilities made the entire experience enjoyable and something we hope becomes an annual event.

Saturday, May 21st, 2016
A Day To Remember, Halestorm, Anthrax, Chevy Metal, Hollywood Undead, Extreme, State Champs
Sebastian Bach, Bear Tooth, Memphis May Fire, We Came As Romans, All That Remains, Avatar,
Thy Art Is Murder, Stray From The Path, For Today, Cliver, Rings of Saturn

(All photos are Copyrighted and cannot be used without permission)