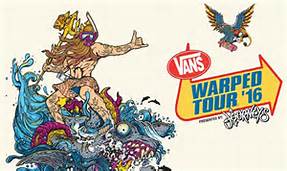 The Vans Warped tour made a stop in Syracuse, NY on July 7th for what proved to be a great day of music and fun. Despite foreboding clouds which hovered over the event site earlier in the day the power of punk rock could not be stopped as once the music kicked off the negative weather took a quick turn towards the positive allowing everyone to stay dry and soak up some rays while listening to this year’s assembled line up.

For over 20 summers now the Vans Warped tour has been the go to for traveling one day festivals featuring alternative and punk rock music. This year despite sporting a thinned down roster, less stages and fewer activities the festival still proved to be just as good if not better than years past. The Syracuse venue featured a great lay out with side by staging for the 6 main stages and a 7th smaller stage was only a short distance from all the bigger action. Each stage offered plenty of viewing space, merch areas and facilities, there was even a massive shaded pavilion area which gave fans a place to escape the sun in between acts. Aside from waiting to get into the venue there were really no other lines to speak of throughout the day which again only added to the events over all appeal. Even the free water filling station which always seems to be a hot bed of action was easy and quick to access. This year’s lineup was a great mixture of up and coming bands infused with some of Warped tours biggest veterans. As the day started out bands like Teenage Bottle Rocket, Masked Intruder and Vanna would put on stellar performances which fit in perfectly between bombastic sets from Warped tour regulars Reel Big Fish, Less Than Jake and New Found Glory. Other notable performances from the day included those by State Champs complete with inflatable waving men and bubbles, Old Wounds who in my opinion dominated the Full Sail Stage, The Interrupters who despite playing later in the day were able to keep the energy going as temperatures pushed towards the 90’s. To cap off an already impressive day the closing set of the festival belonged to Sum 41 who bashed out hit after hit to the massive crowd.

Despite a scaled down lineup and production this year I felt that Warped Tour 2016 was better than ever. Sure having a bunch of stuff to do in between acts is fun and all but, when you go to a rock show you are going essentially for the music. That was clearly the focus for this year’s tour as you couldn’t have asked for a more stellar line up. Aside from the extremely long lines to get into the venue the day was a lot of fun and we heard a lot of really great music. The tour runs through August 13th so be sure to grab tickets for one of the shows closest to you. You won’t be disappointed.

All photos are copy written and cannot be used without permission