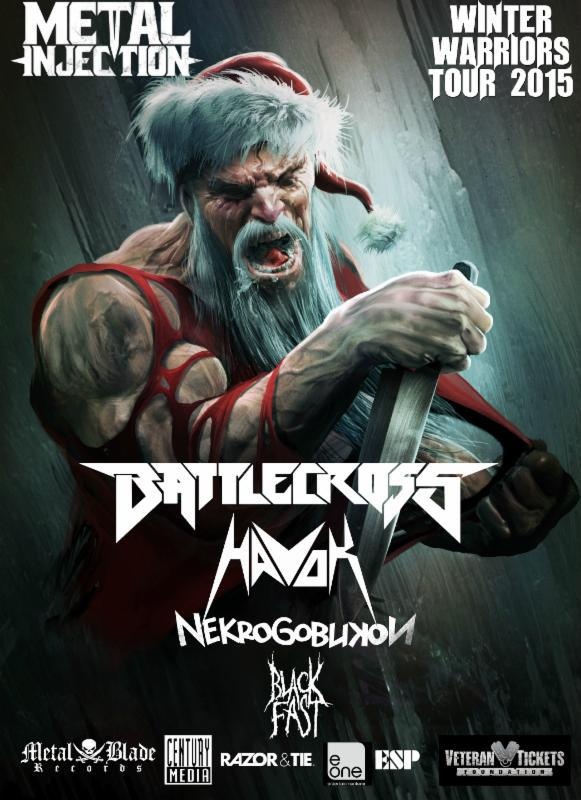 Metal Injection’s 2015 Winter Warriors tour made a stop at the Montage Music Hall in Rochester, NY as part of a brief 6 show run. The bill which featured Black Fast, Nekrogoblikon, Havok and Battlecross was certainly not one for the faint of heart as all 4 bands commanded the crowd’s attention before pummeling them with a barrage of bombastic sonic landscapes.

After a small spattering of local talent the main bills opener Black Fast would be first to take the stage. The 4 piece progressive thrash group hailing from St. Louis, Missouri did an impressive job with the short time they had as they did a great job loosening up the crowd with their set which was a mixture of older songs along with a couple from the group’s latest release “Terms of Surrender”.

Up next would be the group I was definitely most excited to check out. Los Angeles, CA natives Nekrogoblikon who up until now have been relatively scare here on the east coast made up for lost time as they shredded through a 30 minute set complete with several appearance by the bands mascot Mr. John Goblikon who assisted the band in working the crowd into a feverish frenzy. The band’s unique brand of mythical tinged metal rang through the venues walls as the band performed songs of their latest release “Heavy Meta” before closing out the set with an impressive rendition of the song “Powercore” which was complete with over the top synth and guitar work that easily made your head spin. Filling the difficult spot of performing after Nekrogoblikon on this night would be bestowed upon Century Media artist Havok. The band which formed in Denver, CO in 2004 mixed classic thrash elements with modern day accoutrements. The groups sound could be described as early Megadeth on speed as each of the bands 4 members are certainly no slouches at their respective instruments. Though lead vocalist/guitarists David Sanchez’s expletive filled rants became a bit tiresome as the bands set went on the group still did a solid job keeping the night’s energy level high.

Tour headliner Battlecross would close out the night in impressive fashion. Having just seen the band opening for GWAR in September I was anxious to see what the band from Detroit could do with a full length set. Needless to say I was not disappointed as the guys seem to only get better each time I see them. With the added time to their set the members of the band wasted no time going right for the throat. The set list was a solid blend of new and old as the band performed a variety of songs from its back catalog however the set lacked any material from the bands August 2015 release “Rise to Power”. Vocalist Kyle Gunther and company certainly appeared to be in top form despite being at the end of months and months of touring proving BattleCross can certainly bring it any place at any time. Though you can never be too sure of a Monday night club show the audience and bands alike seemed to enjoy the night’s festivities making this unseasonably warm night in Rochester, NY a good one for heavy music.