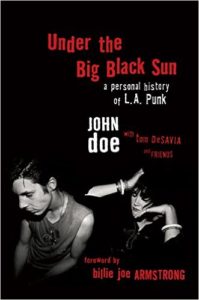 “Under the Big Black Sun: A Personal History of L.A. Punk” was written by X vocalist/bassist John Doe along with help from Tom DeSavia and laundry list of who’s who from the late 70’s and early 80’s L.A. punk scene. For the first time in one place the true story of a scene often overlooked is told in all of its gritty and grimy detail by none other those who experienced it and by those who helped create it. This is not your typical memoir however as this book tells not only of how the scene began and developed but also how it went on to change music forever.

Before I get into my review of the book I want to point out that if you are unfamiliar with the scene this book documents or the bands that appear grab a copy of Penelope Spheeris film “The Decline of Western Civilization” as a majority of the people’s names and a lot of the places featured in the film coincide with those who are also in the book. After a very brief forward by Green Day front man Billie Joe Armstrong we are quickly whisked back to the not so glamorous side of Los Angeles. Just a few brief years before hair metal would dominate the sun set strip bands like X, Black Flag and the Minute Men were the bands to go see. John Doe does a great job recounting his stories from this era with vivid detail and truthfulness that make you want to keep turning the page. As an added element to Doe’s story there is often even more colorful commentary provided by other musicians or friends who were there to experience everything as well. Not only does this add different angles to a previously told story but it fills in gaps with intricate firsthand accounts. For me this only pulled me further into the already captivating story. To go along with the stories there are several black and white photo sections which are chocked full of rare photos that by themselves are worth the price of the book.

From cover to cover Doe and DeSavia and crew nail it. Aside from actually being around during this specific time I don’t think you could get any closer nor could it be anymore real. There were a few times when I wished Doe had kept going from his perspective as sometimes when the story teller switched you were in a sense re-reading some of what was just told however, that aside “Under the Big Black Sun: A Personal History of L.A. Punk” is a great book for not only punk rock fans and music but for those wanting to learn about a period of time in Los Angeles that isn’t sugar coated with all the normal glitz and glamour LaLa Land is often associated.