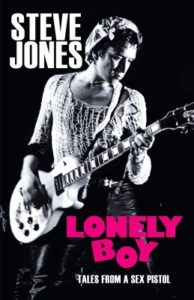 “Lonely Boy: Tales of a Sex Pistol” recounts the life and times of Sex Pistols guitarist Steve Jones. Through the nihilistic songs, amphetamine-fueled music, and influential fashion that turned a one-time street urchin into a founding member of a genre-defining band “Lonely Boy” offers a truly in-depth portrait of one of punk’s founding fathers.

For anyone with even the smallest bit of knowledge related to Steve Jones and his band The Sex Pistols I don’t have to tell you what to expect from “Lonely Boy”. Sex, drugs and rock and roll it’s all here told directly from the man who lived and breathed it. Throughout the books 308 pages Jones takes the reader on a cringe worthy ride that starts off with detailed accounts of Jones traumatic childhood which was rout with abuse and neglect. As the book progresses the reader is treated to firsthand accounts of the early incarnation of The Sex Pistols and how it morphed into what the world would see as the band were made into the poster boys of punk rock for generations to come.

Not just your everyday run of the mill biography. “Lonely Boy” delves much deeper than other books in the genre. Jones forges straight on into rough waters as he recounts the events that would shape who he has become today. From the ups and downs his band The Sex Pistols created to his struggles with severe drug addiction this book is not for the queasy as it probably as real as one can get. At times I found the stories to wander and be a bit lengthy however pushing through there was always light at the end of the tunnel as each chapter blended nicely into the next. Also worth noting are the photos which are included in the book. Many of them were ones I had not seen before only adding to the books unique story and making “Lonely Boy: Tales of a Sex Pistol” is a must read for any and all music fans.