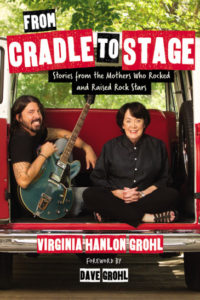 When Virginia Hanlon Grohl first saw her son perform in front of thousands of screaming fans she knew that rock stardom was meant to be for her son. And as Virginia watched her son’s star rise, she often wondered about the other mothers who raised sons and daughters who became rock stars. Were they as surprised as she was about their children’s fame? Did they worry about their children’s livelihood and wellbeing in an industry fraught with drugs and other dangers? Did they encourage their children’s passions despite the odds against success, or attempt to dissuade them from their grandiose dreams? Do they remind their kids to pack a warm coat when they go on tour?

All those answers and more are contained in “From Cradle to Stage: Stories From the Mothers Who Rocked and Raised Rock Stars”. Over the course of the books 204 pages you get a unique behind the scenes look like never before. However not from the stars themselves but from their mothers! Yes that’s right their mothers. Along with author Hanlon Grohl own story of motherhood we hear from other moms including Verna Griffin (Dr. Dre), Janis Winehouse (Amy Winehouse), Hester Diamond (Mike D of the Beastie Boys) and Bettye Moses and Harriette Brown (mother & step mother of Zac Brown) as they recount the years before, during and after their sons and daughters became house hold names. I don’t recall a book like this ever being released which adds to the appeal because who is better to ask about those earlier childhood years than one’s own mom.

The candid firsthand accounts are what really kept me turning page after page. “From Cradle to Stage” is a fun, fast read unlike any biography I have come across before. While the book does a great job showcasing several mothers’ journeys its underlying story about the bond between parents and children is its greatest attribute. Not only is this a great read for parents but also for anyone looking for a different look at some of music’s biggest artists and the moms who impacted their lives.