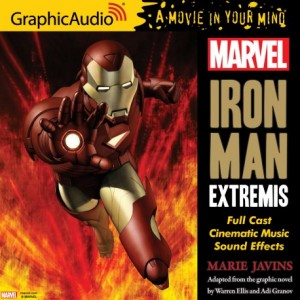 Do you love comic books? Do you love audio books? Have you always wanted to hear your comics acted out like “a movie in your mind”? Well Graphic Audio now has your prayers answered. This year they have already released two fantastic comic books arcs for Marvel in audio book format. They have full casts, cinematic music and sound effects. While you are listening to these you literally can visualize the comic and you feel like you are right in the middle of the action. The most recent Marvel comic they released was the story of “Iron Man: Extremis”. This is a great choice for the character of Iron Man. The other earlier this year was “The Ultimates: Against All Enemies”, which is a very epic series for Marvel. Graphic Audio has tons of other great products as well and I hope that they will be doing much more Marvel and DC comics in the near future. Might I suggest the recent “Original Sin” series next?!

“Iron Man: Extremis” Official Premise: Advanced technology has given Iron Man life, but now that same future tech threatens to become Stark’s death. A dangerous terrorist has ingested a new techno-organic virus, transforming him into a superhuman killing machine. Now immensely powerful, but driven mad by the virus’ effects, the terrorist is seemingly unstoppable. To halt this madman’s psychotic rampage, Iron Man must face this dangerous new virus head-on…in a life-or-death battle that will forever alter Stark’s calculated balance between man and machine. Experience Warren Ellis and Adi Granov’s blockbuster re-imagining of the armored Avenger like never before in this new adaptation! 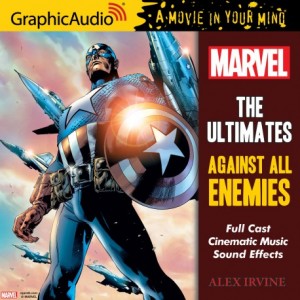 “The Ultimates: Against All Enemies” Official Premise: Stark Industries has developed a technology to detect the alien Chitauri using on-the-spot DNA screening. The American defence department intends to make the technology widely available, but someone in the government puts a stop to it. Captain America sees the government’s suppression of the Stark technology as evidence that the people making such decisions are themselves compromised. Using as his model Franklin D. Roosevelt’s executive orders during World War II, he begins to gather power to himself and those Ultimates and government officials sympathetic to his authoritarian approach so that power can be concentrated in the hands of those capable of taking quick and decisive action. Hank Pym, who desperately wants back on the Ultimates team, has been feverishly working with his ants in the hopes of finding something that will help defeat the Chitauri. When his ants attack one of his research assistants, who turns out to be a Chitauri, Captain America resolves his differences with Pym and the new team begins work on what they call Operation High Hopes.