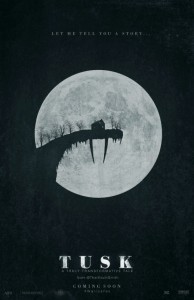 Ah yes, that uncertain feeling of love or hate when walking out of the movie theater. It seems A24 has this knack for finding these bizarre titles that leaving me feeling a bit clueless on my personal opinions and emotions. On one hand, during “Tusk”, I couldn’t stand it and wondered if it would be ethical for me to just get up and walk out of the theater, and still talk be able to with you about it. But on the other hand, some part of me, that watches and giggles during Troma movies, enjoyed this perverse hodgepodge of midnight horror and black comedy.

“Tusk” was an idea born on a podcast (I’m sorry, smodcast) that for some reason became Smith’s return to movies. If you remember, he stated that he was retiring from filmmaking…then said he was going to come back and do “Clerk III” and that would be his last movie…then somewhere along the line “Tusk” happened. Seems like this may have been some kind of last minute idea that was quickly rushed, and at times during “Tusk”, it definitely shows.

Wallace (Long) has the job that’s only possible in movies; he makes his living as a podcast host. He’s the mean spirited man behind the “The Not-See Party” show which provides a string of predictable jokes throughout the movie (Nazi! Get it? OK then…). He plans on going to Canada where he will interview a viral media star and most likely embarrass him for his adoring fans. Much to his selfish dismay, the kid has killed himself, and he doesn’t want to waste his $500 plane ticket, so he takes an ad found in a bathroom that promises a fantastic story/adventure.

He drives to the middle of nowhere to an eerie mansion owned by Howard Howe (Parks). He’s a salty old man that glides from spot to spot in his wheelchair and seems suspiciously excited to tell the inconsiderate Wallace about his lifelong adventures. Among his tales, he spins a story about his encounter with a walrus…the only creature that ever loved him. During his story, Wallace fails to realize that his tea has been drugged. He passes out and awakes to a horrifying scenario. Wallace, through the visually grotesque art of surgery, will turn him into a walrus. Now comes the part of the movie where people might start walking out.

For those who remain seated, Parks never runs out of scenery to chew and it’s a surprise he never gets full off it. Every scene he is in is a joy to watch as he talks like a well-learned aristocrat, but flips on a dime to a walrus obsessed sociopath that would give the creepiest of animal lovers the heebie jeebies. I’m not sure who turned Smith on to this wonderful actor, but he’s definitely been the saving grace now in Smith’s past two movies.

As a comedy, I didn’t chuckle; although the prospect of a disfigured human-walrus hybrid version of Long does make me smile. I almost laughed at the surprise cameo in the third act of the film, but even before the big reveal I had some sneaking suspicion about who it was. He definitely adds a certain flavor to his scenes, but one in particular feels long, dry and unfunny.

There’s no doubt in my mind that Kevin Smith fans will gobble this up like most of his releases and that’s not to say I’m not a fan of his work. One of my biggest concerns is that this is a man that still needs an editor’s input. There’s a couple long winded moments where Smith plays show and tell where just showing or telling would have been perfectly sufficient to explain the scenario. He has progressed as a filmmaker since his incredibly low-budget cult classic “Clerks”, but he seems to playing to his audience more than he’s trying to find something new to do.

As for the final verdict on “Tusk”, it’s still an internal debate as I finish this up. It’s definitely one of Smith’s weaker entries into his catalogue. Its purpose feels misguided, if there is a purpose, and feels lazy in some regards. I think it’s a movie I enjoyed, but it’s definitely not something I can recommend unless you’re a fan of Smith’s work or someone who grew up on Joe Bob Brigg’s Monster Vision and have a “refined” taste for hokey monster suits and over-the-top villain theatrics.