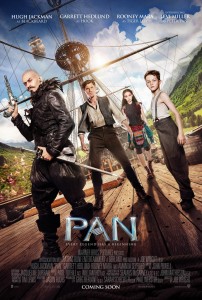 It’s a familiar theme in some films. Mother leaves newborn on a friendly doorstep hoping the people inside will give him/her a better life. Such is the case of young Peter, who is left outside a London orphanage in the sometime before World War II. Wrapped only in a blanket and wearing an odd-looking necklace, the baby is taken in.

Jump forward and we find a 12-year old Peter and his friends living in a cramped area, doing menial chores for the tyrannical Mother Barnabas (Kathy Burke). Among their chores is going up on the roof to clean out the gutters, which is a rather odd task to assign a child, especially with all of the air raids going on. While doing their daily tasks, Peter notices that the population of children is dwindling. He’s assured that the youngsters have been “furloughed” out…send to a safe place because of the war. However, he soon learns the truth when he and his fellow orphans are plucked out of their beds and carried away to…you know where!

Full of amazing effects and riding a fine, over-the-top performance by Hugh Jackman, “Pan” is sure to be a hit with the 12-14 crowd. All of the familiar characters are here: Smee (Adeel Akhtar), Tinkerbell and a certain Mr. James Hook (Garrett Hedlund), who quickly befriends Peter. This version of Neverland is full of young boys who like to have fun. For some odd reason they often break into song, including a rousing version of Nirvana’s “Smells Like Teen Spirit.” When on screen, Jackman gives a bravura performance. It’s almost as if he’s imagining he’s back on Broadway and he has to be “big” enough for the people in the back of the balcony to hear him.

The rest of the cast is equally energized. Young Miller gives Peter a certain youthful quality that’s often not shown in other films dealing with the same subject. Things get a little weird when Rooney Mara shows up as Tiger Lilly, who immediately strikes up a reciprocated flirtation with Hook. The fact that there should be a good 15-years between the two is glossed over. And before the protests begin, I think Mara did as fine a job here as any Native American actress would have!

Some of the grand battles are quite impressive, though I should warn people with kids under 12 that they may be a little overwhelmed, especially with the 3-D, which works to some success here, helping make “Pan” a fantastic adventure for kids.