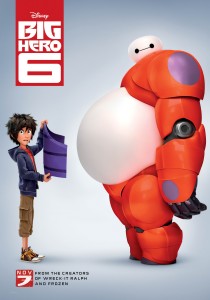 For those that do not know “Big Hero 6” is inspired by the Marvel Comics superhero team of the same name, which was released back in 1998. In fact, “Big Hero 6” is the first Disney animated film to feature Marvel Comics characters. They aren’t well-known characters like “The Avengers” but still Marvel characters nonetheless. I have to admit, I was expecting a little more from this film. I enjoyed it overall but I didn’t walk away screaming “WOW!!” like I did with recent past Disney animated films like “Tangled”, “Wreck-It Ralph” and “Frozen”. I absolutely loved those films but I only liked “Big Hero 6”.

Let’s start off with the fact that I love Baymax. I love him. He is literally the main star of this film. He steals the show. Other than him, I really wasn’t in love with any of the other characters at all. It all felt a little generic to me. Luckily, the film had a lot of heart to it and it ended up winning me off in the third act. There was some quite intense moments in the film as well that I questioned “is this really a kids film?”. I have a two year old daughter and she has seen “Tangled”, “Wreck-It Ralph” and “Frozen” numerous times each and I will NOT be showing her this film for many years. There are also some parts that are downright creepy with the Kabuki-faced villain.

I loved the fictionalized created city, San Fransokyo. It is very bright and quite beautiful especially during the flying scenes. The animation is great and no complaints there at all. Viewing the film in 3D, there are some great epic scale shots for the effect but I wasn’t very blown away with it anyway. There are no in your face gags either. If you want to see it in 3D though, check it out in theaters since Disney doesn’t release 3D Blu-rays anymore. The score is epic by Henry Jackson but nothing too memorable. I don’t really see myself listening to the score after seeing the film unlike “Tangled”, “Wreck-It Ralph” and “Frozen”, which are all on my phone still today.

While “Big Hero 6” is not one of my favorite films of the year, it is still a fun time to be had. Like I said it has a lot of heart and even might be able to get a few tears out of you if you are feeling emotional. The visual effects are great. Baymax is easily one of the coolest and most lovable characters. I liked it but I do not see it being very memorable. In my house, we must watch  “Tangled”, “Wreck-It Ralph” and “Frozen” each at least one a month at the least, I do not see many repeat viewings of this film. Be sure to get to the theater early to catch the short film “Feast”, which is nothing short of outstanding and easily outshines the film it precedes.