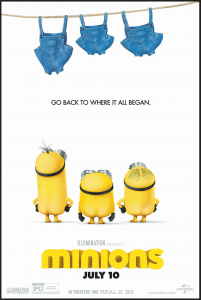 Minions have the lovability of a puppy dog, the comedy stylings of a group of rambunctious Kindergarteners, and they’ve now gotten their own movie. A lot can go wrong when you give the side characters of your main movie their own big picture. When it works, like “Puss in Boots,” it works, but it’s not a very memorable entry. The creators of “Minions” have surprisingly avoided the potential spin-off pitfalls by realizing the best way to handle their yellow pill shaped creations, is by simply allowing them to be silly.

The plot in this movie is paper thin, but it doesn’t need the emotional heft we’ve seen in the previous “Despicable Me” movies. Sure our pint sized pals have their own characteristics, but they don’t have the depth of Gru or the deep characteristics of any of the other humans inhabiting this world. “Minions” mainly follows the three yellow creatures named Kevin, Stuart, and Bob. Their journey begins after a brief and funny backstory on how the minions have become servants. The brave trio is about to go out into the world to find a deviant master. They’ve spent years huddled in the cold ice chambers of Arctic after centuries of accidentally killing or shaming all their previous rulers.

The three arrive in the states and find their way to a villain convention where they become enamored by Scarlet Overkill (Bullock). Unlike Gru, she’s very selfish in her ambitions, which aren’t necessarily made clear. The majority of the movie moves at a disorganized pace that only serves one purpose, to make you laugh and to entertain. And honestly, that’s all I really want out of a movie about the minions.

Despite my enjoyment of all the visual gags and slapstick humor, I wish the story wouldn’t have plodded around so much. The weakness comes when Kevin, Stuart, and Bob are on their own. They communicate through their own gobbledygook language and it doesn’t feel as fast paced as a skit when the minions act more like a collective brain than in an individual manner. Kevin, Stuart, and Bob manage to create their own identity by the end of the movie, but it’s not a very strong one or one that helps differentiate themselves that much from the others in the minion collective. Kevin is the leader of the three, Bob is the most playful and childlike of the group and Kevin is….Kevin.

Just like in the previous movies, “Minions” work best when they react to a situation. Overkill is the deepest character in the movie, but she’s the developed character that populates the “Despicable Me” universe. But if she was created to simply be a piece for the minions to react to, then her purpose has been served. It just feels like a waste when you bring on a big name like Sandra Bullock to voice As for the other voice actors, they’re very good, especially Jon Hamm who plays Scarlet’s lover/accomplice. He almost sounds like Bill Hader, who I highly regard as an amazing voice actor. Not that Hamm is in his post-“Mad Men,” he should consider more voice-acting roles.

It isn’t the best children’s movie of the year, but that’s certainly hard to do nearly a full month after Pixar released its shoe-in for the best animated feature film of the year Oscar. While Pixar has the awards, “Minions” will certainly be raking in the money, but that’s because at the end of the day, the minions are still loveable. “Minions” is fan-service and playful entertainment, plain and simple. If you want more story and plot, maybe you should wait until “Despicable Me 3”.