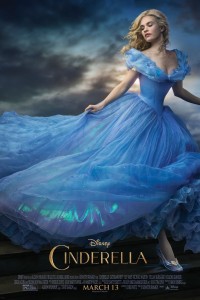 From European folk tale to Disney classic to one of the most reincarnated, reimagined and adapted movies in my life. Just a quick Internet search turned up at least a dozen adaptations within my lifetime of the fairy tale. I’m certain that further research could uncover at least one redesign of the beloved movie for every year I’ve been alive. I merely point this out because a lot could have gone wrong with this live-action update, but I’m happy to say it greatly exceeded my bare minimum expectations.

We all know the story of “Cinderella” right? I mean, unless you’re eight-years-old or younger or you’re Amish, there’s a high probability that you know the story. There are some cruel stepsisters, an even more fiendish stepmother that berates the unfortunately orphaned Cinderella. Cinderella beats out the odds and misfortunes of life with the help of a fairy godmother. With magical help, she attends a lavish ball, enchants the prince and leaves a memento for him to chase her down with, a glass slipper. This is a story that’s been told hundreds of times, so I hope you know what I’m talking about. Now, I’m not here to argue the necessity of another or new “Cinderella” movie, but I’m going to tell you that it’s not a rushed cash grab. It probably is a cash grab for the young ones who don’t know “Cinderella”, but at least they’re getting something of quality and substance.

While Lily James, who plays Cinderella, is obviously the focal point, Blanchett really steals the scenes as her venomous stepmother. She starts as a haughty socialite, but Blanchett transforms slowly over the movie into a bitter hag who puppeteers the weakest people around her. Helena Bonham Carter enters as the fairy godmother and is also quite delightful in her small, but significant role. As for Richard Madden as the prince who inevitably falls for Cinderella, he just stands there and looks pretty; Which isn’t a bad thing.

The real high marks for me in this movie are the set and costume designs. While the wide shots of the sprawling castle are obviously CGI, the exquisite ball and all its guests are real and in real costumes. The vast, but snug cottage that Cinderella is in has a Victorian appeal. The movie feels grand while remaining intimate in it’s settings. Everything could have easily been green screened, but it’s great to see a filmmaker and crew that understands tradition and puts in a time-honored effort of good old fashioned design. It’s a well-made, guilty pleasure for Disneyphiles and a refreshing blast from Disney’s treasured past for everyone else.