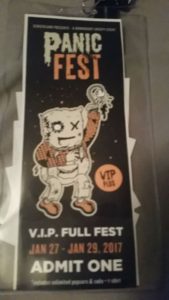 The folks behind Panic Fest have a deep passion for horror and it showed all weekend long. Just like the past four years, the event was an absolute blast. While there’s always room for improvements, such as the amount of room there is at the Screenland Armour, it genuinely feels like the movies, the Q&A’s, the vendors, and everything else, were passionately combed over and whittled to near perfection. The efforts behind the creators and sponsors didn’t go unnoticed by those in attendance

The highlight from my first day was the sampling of local horror. Attendees were treated to movies with a local connection. I caught “Tonight She Comes” which was filmed in Missouri, just south of St. Louis, and was not for the faint of heart, squeamish, or those with a working moral compass. The other movie I caught was “Arbor Demon,” which was directed by KU alum, Patrick Rea. Despite his desire to film in his stomping grounds, he filmed his camping trip turned nightmare in South Carolina.

The second day, since I wasn’t hungover, began with an 11 a.m. selection of Saturday morning cartoons. Forever Bogus hosted the screening of late 80’s and early 90’s cartoons. As for the rest of the day, it was an eccentric collection of B-movie horror, nostalgic throwbacks, and psychological horror. The highlight of my night though was “The Last Podcast on the Left.” The trio of hosts, Ben Kissel, Marcus Parks, and Henry Zebrowski, tickled the funny bone throughout with taboo topics like Charles Manson, and absolutely bizarre topics like Batsquatch.

The final day was a rehash of some movies folks may have missed along with some new movies mixed in for flavoring. I feel like I caught the two best films of the festival that day though. Despite my well belief that the “Walking Dead” has ruined the zombie genre, “Train to Busan” and “The Girl with All the Gifts” is evidence to the contrary. And I’d be crazy not to mention “The Void.” Imagine if the creature effects people behind “The Thing” stumbled into a Clive Barker fever dream. That’s what watching “The Void” was like.

For those who attended, I bet you had a blast like I did. For those who didn’t, I hope to see you next year. You can check out the Screenland Armour here since they will be sprinkling some of the films from Panic Fest throughout the year. You can also go to the Panic Fest website here to keep an eye out for next 2018 and check out the movies I mentioned and didn’t mention.

Filed Under: Art/Theatre, Conventions Tagged With: arbor demon, girl with all the gifts, panic fest, the barn, the basement, the last podcast on the left, ...