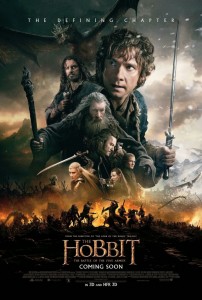 It’s over. After thirteen years and six films, Peter Jackson has completed not one but two amazing film trilogies that will be thrilling viewers for generations to come. Welcome to the final chapter of “The Hobbit” series, “The Battle of the Five Armies.”

When we last saw Bilbo Baggins (Freeman), he and his dwarf friends had royally pissed off the great dragon, Smaug, who was doing his best to destroy Laketown. In case you didn’t see the middle film, “The Desolation of Smaug,” the final film opens with the same scenes that closed part two. Kind of like getting to see the end of the fight from “Rocky” when you screen “Rocky II.” Once things calm down the film settles into its narrative…Thorin (Richard Armitage) has gotten “gold fever” and begins to distrust those around him. Did you ever see the old Daffy Duck cartoon where he stumbles into a vault and begins to hoard all of the treasure? Well, it’s pretty much like that except Throin doesn’t run around yelling “mine, mine, mine….no, no, no!” Meanwhile, the Orcs are heading towards our heroes’ location, guaranteeing that the title battle will indeed take place – Orcs, Dwarves, Elves and Eagles spend an almost wordless 45 minutes kicking serious ass. So why am I not as in love with this film as the previous ones? One word: Legolas. Apparently his long blonde hair makes him able to defy gravity among other incredulous activities. Yes, I know it’s a fantasy but come on all ready!

On the plus side the film’s cast is as game as ever to bring the story to life and the special effects continue to amaze. If nothing else, Jackson has established himself as a master storyteller, even when the story sometimes goes a little off track. The saga is over and what never could have been imagined on screen two decades ago has now come to life. If that’s not something to be thankful for at this time of year I don’t know what is.