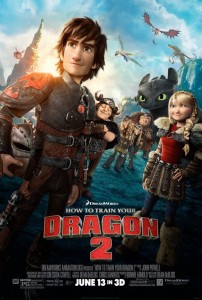 In a year void of anything new from the geniuses at Pixar, you’d think there would be an animated vacuum where the gap would be filled with shameless sequels and lazily written cash grabs (to be fair, there is the sequel to “Planes” coming out this summer). So it’s understandable if the average movie patron is worried that “How to Train Your Dragon 2” could wind up in that category. But I’m happy to say it defied my low expectations and soared to insanely creative heights with another superb story.

It’s been years since the hairy, broad shouldered Vikings of Berk have made peace with the dragons they once feared. They’ve successfully integrated everything in their society with their newly acquired winged friends. Hiccup (Baruchel) continues to break the Viking stereotype by using his brain more than his brawn. He also seems more in sync with his dragon, Toothless. Despite these recent successes, Hiccup is a bit apprehensive because his father, Stoick (Butler), appears to be grooming him as his successor so that he can be the next chieftain of Berk. Hiccup doesn’t believe he’s ready and he’s more focused on scoping out new dragons and new lands.

This constant thirst for more knowledge about the surrounding territory brings in a new threat. He comes across a dragon trapper, who tells him of Drago (Djimon Hounsou), a man who is amassing a dragon army. Drago views dragons as a scourge that he must eradicate by enslaving them. His quest for dominion over dragons sadly comes at the cost of human casualties along the way. Things are further complicated by a mysterious figure that seems to have a bigger attachment to dragons than Hiccup and appears to be at odds with Drago, but it’s uncertain if they’re a friend or foe.

I was worried that a lack of Chris Sanders, director and writer from the first movie, might actually defang what momentum a sequel would have, but Dean DeBlois gets to fly this one solo and doesn’t hit any turbulent air. He keeps the merriness of our dragons intact. While the story goes on, dragons are constantly acting like playful dogs or cats in the background, giving them a more relatable quality when they are consistently acting like our affectionate household pets. The voice acting is once again spot on and having Cate Blanchett on board adds another flavorful spice of adventure.

This movie continues the relationship building between Hiccup and Toothless, but creates a more substantial scenario for Hiccup to grow and better understand the relationships he experiences. There’s also some hefty emotional weight attached here, made heavier by some surprisingly mature content that shows DeBlois is not afraid of taking some risks to further enchant the audience. With so much plot to trudge through, other directors would have simply gotten lost or stuck to the ‘boy and his dragon’ cliché, but DeBlois gives the dragons just as much psychological depth than the humans.

Visually, Dreamworks is going toe to toe with some of the best in the industry once again and holding nothing back. Viewers are definitely going to be swept away in every battle sequence and get lost in the flying sequences that are nothing short of incredible. While the first “How to Train Your Dragon” feels like a fantastic stand-alone movie, the sequel showcases the ability to create a living, breathing franchise that may actually have the wings and power to push forth. I say that because a third is in the works and after seeing how daring and original they are, it’s a safe bet to get your expectations out of the gutter and put them near the top for “How to Train Your Dragon 3” in 2016.