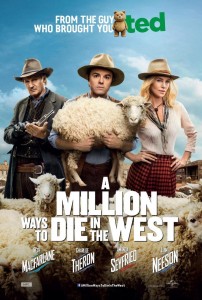 There are actually some lofty expectations for “A Million Ways to Die in the West”. Weird, right? Two summers ago Seth MacFarlane put out the comedy sleeper hit, “Ted”. It combined his “Family Guy” style of random, filthy humor with the likeable personas of Mila Kunis and Mark Wahlberg coping with the next step of their relationship. Once again MacFarlane throws everything and the kitchen sink from his bag of humor in the hopes of pulling a throaty laugh from his audience and for the most part he succeeds. “A Million Ways to Die in the West” also stirs up a worthy farce of Western movies.

But let’s not get ahead of ourselves and hail the second coming of “Blazing Saddles”. MacFarlane is the lead, which deters him from drawing some of the biggest laughs in the movie. As Albert, a spineless sheep farmer, he does have some very good quips, but the supporting cast padding is what makes “A Million Ways to Die in the West” a comedy gem. Friends of Albert, Edward (Giovanni Ribisi) and Ruth (Sarah Silverman), are a Christian couple who are waiting until marriage to make love; which is constantly complicated by the fact that Ruth is a prostitute with customers who continuously find more unique ways and inopportune times to tell her to get upstairs and bang them. Louise (Amanda Seyfried) is Albert’s ex-girlfriend who is the butt of jokes, but is now dating the master of mustaches, Foy (Neil Patrick Harris). NPH is an absolute pleasure in every scene, selling every moment more than anyone else in this movie.

Then there’s the warm and beautiful Anna (Theron). A smart, quick trigger gal who finds her way into Albert’s slice of hell town called Old Stump. Upon meeting and slowly falling for each other, she fails to mention to Albert that her husband, Clinch (Neeson), is one of the most dangerous and deadly outlaws in the west that has a sadistic code of ethics when choosing who to kill. Anna and Albert complement each other with their smartass remarks and craving to be with someone who appreciates them for who they are. MacFarlane and Theron sport some decent on-screen chemistry which probably comes as a shock for the thousands who were up in arms over MacFarlane’s “We Saw Your Boobs” at the 2013 Oscars.

The characters in this movie have an odd, child-like approach to plenty of crudeness which makes it all the more humorous and ridiculous. Comedic scenarios feature a combination of sight gags, one-liners and a visually gross punctuation. Also slip in the unnecessary violent death to further accent the title of the movie. With such a palette of absurd and juvenile humor, there’s something for everyone in this rapid fire executions of jokes, at least anyone who isn’t afraid of a little inappropriate, sexual and racial provocation. Some of my more favorite scenes feature a hyper violent bar fight and the interactions between Albert and his aging father who speaks his emotions through expletive hyperboles.

While “Ted” was a perfect blend, cast-wise, “A Million Ways to Die in the West” feels incomplete. The lengthy running time starts to show as we continue to wait for the climactic showdown between Albert and Clinch. Also I can’t quite heap on the same amount of praise to MacFarlane that everyone else got. He isn’t admirable enough to be the improbable hero. He has a low level of smugness that ruins the high octane levels of every-guy so we don’t quite see him as amiable. NPH would have been miles better in the lead role and it’s a puzzle as to why no one pointed this out to MacFarlane when the script was being read. Regardless, “A Million Ways to Die in the West” is the comedy to beat so far this summer.