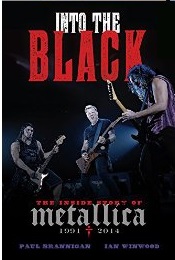 “Into the Black: The Inside Story of Metallica 1991-2014” is the second book in a two book series written by Paul Brannigan and Ian Winwood. The follow up to 2013’s “Birth, School, Metallica, Death” which chronicles the bands first decade from 1981-1991. “Into the Black” takes you deeper than its predecessor as the book covers the bands dealing with subjects like fans and fame to competing with other bands in the heavy metal aren. The book recounts one of the bands more turbulent era’s as it looks at the bands dispute with Napster, the disastrous tour with Gun’s N’ Roses and the band return to the spotlight after front man James Hetfield’s battle with addiction.

Authors Paul Brannigan and Ian Winwood cover both the highs and lows that the band has experienced in the later part of its career and though not an officially licensed “biography” this is probably the closest thing I have seen thus far. Everything from bassist Jason Newsted’s departure to the release of “Death Magnetic” and the epic Big 4 tour is recounted in this book. Though I enjoyed the writing duo’s first book I found “Into the Black” went a bit further. Growing up during this era of the bands career the book sparked some great memories for me related to the music and remembering the noted headlines and occurrences in the bands career that were being shared in this book. The book also had several photos of the band that I hadn’t seen before which was cool in its self making this a must have any true Metallica fan out there.