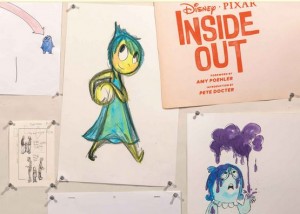 Personally Disney•Pixar really hasn’t WOWed me recently with their sequel/prequels from “Cars 2” to “Monsters University”, it is really excited to see them going back to an original movie like “Inside Out”, especially with Academy Award-winning director Pete Docter (“Monsters, Inc.,” “Up”) taking lead. This film looks to be one of the best projects to come out the doors of the studio recently. This film really looks to examines the depths of the mind and the powers of emotion and imagination. In terms of “Art of” books, this one is a one of the better to come from the Disney series.

Official Premise: Growing up can be a bumpy road, and it’s no exception for Riley, who is uprooted from her Midwest life when her father starts a new job in San Francisco. Like all of us, Riley is guided by her emotions – Joy, Fear, Anger, Disgust, and Sadness. The emotions live in Headquarters, the control center inside Riley’s mind, where they help advise her through everyday life. As Riley and her emotions struggle to adjust to a new life in San Francisco, turmoil ensues in Headquarters. Although Joy, Riley’s main and most important emotion, tries to keep things positive, the emotions conflict on how best to navigate a new city, house and school.

“The Art of Inside Out” gives the reader an exclusive inside look into the hard work that went into the making of this vibrant film. It features tons of eye-catching and very colorful concept art including sketches, collages, color scripts. There is also a great foreword by actress Amy Poehler and also an introduction by the film’s writer and director Pete Docter. Actually speaking of text, there is not much text here at all, which is a big of a minus but the tons of great photos really make up for that shortage. Now the only problem after reading this book is that I want to see this movie 100% times more now! Can’t wait!