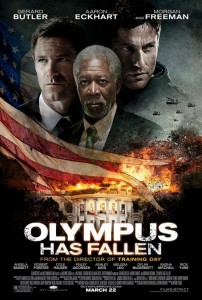 It’s a snowy night at Camp David. President Asher (Eckhart) is currently in the ring, sparring with his main Secret Service man, Mike Banning (Butler). Later that evening the president, his wife (Ashley Judd) and son (Finley Jacobsen) will leave for a party and get into an accident, one that leaves Mike having to choose whether to save the president or the first lady. Sorry, ma’am. Tales, you lose. Eighteen months later Mike finds himself riding a desk at the Treasury Department, no longer a part of the presidential detail. But an attack on the president soon brings Mike back to 1600 Pennsylvania Avenue.

Directed with maximum impact, “Olympus Has Fallen” could easily be pitched as “Die Hard” in the White House. Not only because the film has some great action but because screenwriters Creighton Rothenberger and Katrin Benedikt have borrowed several plot turns from the adventures of Mr. John McClane. As this is their first produced screenplay I can only think that in between writing sessions they wore down a VHS copy of “Die Hard” in the VCR. I would be giving away plot points to go any further but I urge you to watch “Olympus Has Fallen” and not say to yourself, “Hey, that’s just like in “Die Hard.”

Retread plot aside, what the film has going for it is a top notch director and a charismatic star (just like “Die Hard,” I might add). Director Fuqua, who guided Denzel Washington to an Oscar in “Training Day,” has a great eye for action and stages the initial attack on the nation’s capital with some breath-taking special effects. Butler, in growling “300” mode, kicks ass and takes names when he’s allowed to switch himself on and defend his commander in chief from all enemies, foreign and domestic. Except a couple of lazy screen writers.