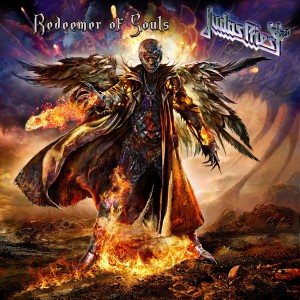 The Metal God and company are back with 17th studio titled “Redeemer of Souls. The album is the follow up release to the bands 2008 release titled “Nostradamus”. 13 all new tracks make up recorded and is the first studio release to feature Richie Faulkner on guitar. Though the band initially stated it would be retiring after their 2011 Epitaph world tour the band sounds better than ever and “Redeemer of Souls” is a testament to that.

When I saw Judas Priest in 2011 as part of their Epitaph farewell tour I was a bit skeptical that it would in fact really be the last time. With the release of “Redeemer of Souls” and the announcement of the groups subsequent tour this fall my prior suspicions were confirmed. From start to finish the album is a perfect blend of modern and classic Priest elements. The albums opening track “Dragonaught” is a rocking number that spews heavy metal goodness out your speakers while tracks likes “Redeemer of Souls” and “March of the Damned” take a more groove oriented approach perfect for head banging and fist pumping. The album wraps up with the track “Battle Cry” which features Halfords signature soaring vocal prowess before giving away to the song “Beginning of the End” a haunting outro showcasing the bands versatility.

All the material written on “Redeemer of Souls” was done by Halford, Glen Tipton and new comer Faulkner. You can certainly sense a freshness to the material which was certainly missing on the last couple Priest albums. My only hope is that this new found inspiration will continue as it would be a shame to stop now. Priest fans both new and old will definitely want to add this to their collections. For those not so familiar with the band get this album and then go back and experience the group’s massive back catalog. You definitely won’t be disappointed!