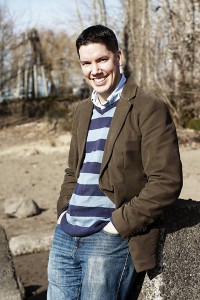 Ian Doescher has loved Shakespeare since eighth grade and was born 45 days after “Star Wars: Episode IV A New Hope” was released. “William Shakespeare’s Star Wars” is Ian’s first book and it is such a blast blend the two very different worlds together. Media Mikes had a chance to chat with Ian about the book and his love for “Star Wars”.

Mike Gencarelli: So why did you choose “William Shakespeare’s Star Wars” as your first book?
Ian Doescher: That’s funny, I feel like I didn’t really choose it — it chose me! The idea came to me after three things converged: I watched the Star Wars trilogy with some good friends from high school, I read Pride and Prejudice and Zombies, and I attended the Oregon Shakespeare Festival with my family. That was all within about two months. So I had Star Wars, Shakespeare and mash-ups on my mind, and the idea was formed out of that combination. Happily, this book mixes two of my passions, so it was really a joy to write.

MG: What was the biggest challenge to blend the Shakespearean aspect into the world of “Star Wars”?
ID:  The biggest challenge is how to make it somewhat believable that the action and futuristic technology of Star Wars could somehow exist on an Elizabethan stage. I handled the action by using a Chorus to explain what’s going on, as Shakespeare does in Henry V, but we still have this Shakespearean language mixed with things like blasters, lightsabers and the Death Star. You probably have to set aside any realistic expectations of a Shakespearean play when you read the book.

MG: How did the whole process take you from inception to release?
ID:  I was extremely lucky in this process, and I don’t take that for granted. After I had the idea, I looked up Quirk Books online (knowing they had published Pride and Prejudice and Zombies and other mash-ups) and found the email address for my editor. I emailed him out of the blue with my idea, and he said he would take a look at the manuscript if I actually wrote something. That was enough to prompt me to write the first act, which I sent to him, he enjoyed, and off we went. Quirk handled the contract with Lucasfilm, and the book was published just under a year after I had the initial idea. This is not the way publishing is supposed to happen — normally it takes much longer for a book to go from inception to release, formal proposals and agents are involved, and so on. Again, I recognize how lucky I am!

MG:  What is your favorite piece from the “Star Wars” universe that you were able to put into the book? 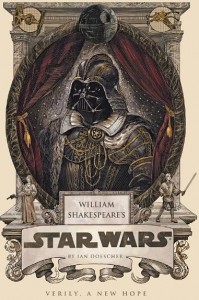 ID:  Han Solo has always been my favorite character, so probably putting his dialogue into iambic pentameter and writing some soliloquies for him was the most fun part of the book. He’s just such a stud — hopefully I made him a Shakespearean stud.

MG: Why is Han Solo your favorite “Star Wars” character?
ID: He was so full of swagger, and for a kind of dorky kid like me it was inspiring to watch someone that cool on the screen. It’s no wonder that Han Solo was the role that made Harrison Ford’s career.

MG:  Do you know if this has yet to make it into the hands of George Lucas?
ID: No, I haven’t heard. I’d like to believe he has read it!

MG:  Since the book is called “Verily, A New Hope”, can we expect a few sequels in cards?
ID:  It would be really fun to see the sequels happen, but at this point nothing is certain. There’s still so much richness to be explored in the trilogy — I have fun imagining what it would be like when Luke finds out Darth Vader is his father, or what Lando might soliloquize about. Maybe the biggest question: how would Yoda speak in a Shakespearean context? It would be fun to play around with (and ultimately answer) those questions.

MG:  What else do you have planned next?
ID:  I’m developing a children’s book with a friend of mine who is an illustrator, and I think there’s another Shakespearean adaptation in me (whether it’s the Star Wars sequels or something else).