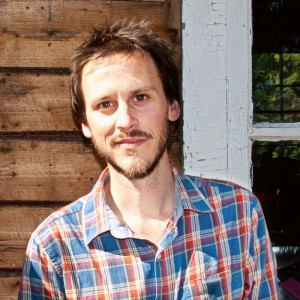 Brian Kevin is a writer who contributes to magazines, websites travel guidebooks. He is also the associate editor at Down East magazine and the author of “The Footloose American: Following the Hunter S. Thompson Trail Across South America”. Media Mikes had the chance to chat with Brian about his journey through South America and how Hunter S. Thompson inspired it.

Mike Gencarelli: When did you first find the work of Hunter S. Thompson?
Brian Kevin: I came to Thompson via Terry Gilliam’s adaptation of Fear and Loathing in Las Vegas back in 1998, which I think is true of a lot of people my age (I’m 34). In the book, I describe the film as kind of a dorm room standard during the late ’90s, when I was a college student, and I’ve since praised it in other forums (http://goo.gl/kL3jl2) as really one of the more faithful literary adaptations in recent cinema. So that kind of piqued my interest in Thompson’s work — who the fuck is this guy? what could this possibly look like on the page? — and I spent the next couple years catching up on the Thompson canon.

MG: Tell us what made you decided to take this yearlong journey across South America?
BK: I’d read enough to know that Thompson had spent this year abroad in the early 1960s, reporting on Cold War issues from South America, and it occurred to me this must have been a pretty pivotal time in the life of a writer I admired. But for all the unauthorized biographies and oral histories and documentaries and other materials out there about Thompson’s life and work (particularly after his death in 2005), his year as a foreign correspondent hardly warranted a mention. I was curious enough to dig through a couple of microfiche archives and unearth the articles he wrote from South America, most of which hadn’t seen the light of day for fifty years. The more I looked into it, the more I admired Thompson’s gall for just up and hitting the road, trying to will himself a writing career. I had kind of gone a safer route — some entry-level magazine jobs, then grad school — and I was feeling like it 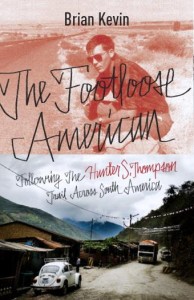 hadn’t gotten me anywhere. Around the same time I was digging up Thompson’s forgotten South American reportage, I suddenly found myself divorced, functionally unemployed, and sitting on a mountain of student loan debt. So I did the only rational thing and traded in a bunch of frequent fliers miles for a ticket to Colombia to follow the Thompson Trail.

MG: What was it like to revisit the places where HST lived and worked?
BK: A lot of people see the title of the book and kind of assume I was carousing my way across the continent in some kind of wanna-be-gonzo fog, but I actually couldn’t be less interested in that. To me, it was all fieldwork — I wanted to revisit the topics that Thompson wrote about for the National Observer fifty years ago and, in the process, get some insight into what he learned in South America that shaped him as a writer and a human being. For all his later gonzo persona, Thompson at 24 was whip smart and super disciplined about understanding the forces shaping Latin America during the Cold War. So traveling in his footsteps meant giving myself a crash course in Latin American history, culture, politics, and ecology. And yeah, that fieldwork sometimes involved drinking heavily with miners, capsizing a boat in Colombia, and patronizing a Paraguayan brothel (sort of), but it really was all in the name of education.

MG: What did you find was the most interesting find of your exploration of twenty-first-century South American culture, politics, and ecology?
BK: Well, the surprising thing was the extent to which the issues that Thompson reported on fifty years ago are still very much shaping the continent. Thompson wrote about Peru’s struggles to overcome a powerful political oligarchy, for example, and that’s still very much the story of Peruvian politics today. He wrote about Brazil as this sleeping giant shackled by inflation, and fifty years later, that’s still arguably the biggest economic story playing out in South America. He more or less predicted the rise of the FARC in Colombia and the ascendancy of cambas in eastern Bolivia and a bunch of other story lines that are still unraveling in 2014. In a nutshell, the interesting thing in country after country was how present the ghosts of the Cold War still are — and that made Thompson’s ghost feel very present as well.

MG: Do you feel that you yourself have changed after this exploration?
BK: You know, I reflect on this a little in the book, and the answer is tricky. A lot of the book ends up being about travel itself — about the reasons people give themselves for picking up stakes and about their expectations of what they’ll come home with. Often, this includes some 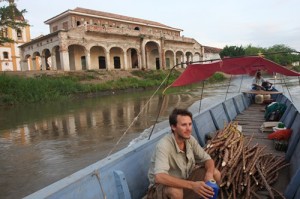 kind of transformation. People want to come home changed in some profound way, and I’m not convinced this isn’t kind of a bullshit goalpost. My time on the Thompson Trail gave me an education, which is really what we should be after anyway.

MG: What do you think it takes to be a “gonzo journalist” in today’s world?
BK: I think this is a term that starts and ends with Thompson. I don’t think “gonzo journalism” is a form or a genre that a writer can just opt into. It’s one specific writer’s style — Thompson’s — and while it can certainly be imitated, the results are almost uniformly shitty. But I do think that the best nonfiction writers working today approach their subjects with the same fearlessness and unorthodoxy and humor and personal investment that were all critical components of “gonzo.”

MG: Do you have a follow up planned for “The Footloose American”?
BK: Yeah, there are a couple of projects in the hopper. One is a deep profile of this globetrotting, nineteenth-century Forrest Gump-type character who destroyed everything he touched, and the other is a sort of a combination road trip tale and education expose. I realize both of these sound a bit weird and cryptic, but you’ll just have to take my word that they’re fun and interesting, and I’ll be all for saying more when they’re a little farther along.