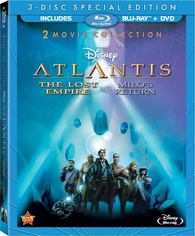 Last year Disney started flooding the market with their less than par animated films on Blu-ray in these 2 Movie Collection sets. A few of them that we got “The Rescuers”/”The Rescuers Down Under”, “Pocahontas”/Pocahontas II: Journey to a New World” and “Mulan”/”Mulan II”. This month we are getting a few more to add to our collections including “The Emperor’s New Groove”/”Kronk’s New Groove”, “Lilo & Stitch”/”Lilo & Stitch 2: Stitch Has a Glitch” and this release “Atlantis: The Lost Empire”/”Atlantis 2: Milo’s Return”. “Atlantis: The Lost Empire” is not the best thing that Disney has every made, it is watchable and put not one of my favorites.  The sequel is another story, it was original made as a TV show “Team Atlantis” but failed and ended up being pieced together as a film. It is quite the failure in terms of Disney. I would say this release is for the hardcore Disney fans only.

Official Premise: Set a course for adventure as Milo Thatch and his fearless crew dive into the mysteries of the sea.  The group’s underwater expedition brings them face-to-face with gigantic sea monsters, spectacular spirits and the mythical land of Atlantis while they discover the power of friendship and teamwork.  Loaded with thrills and stunning visual effects, this sensational 2-Movie Collection takes audiences on an unforgettable voyage they’ll want to experience over and over again!

The 2-Movie Collection release of “Atlantis: The Lost Empire / Atlantis: Milo’s Return” is a 3-disc set. Which includes both films on one Blu-ray with each film also included on their own DVD. In terms of Blu-ray presentation, the 1080p transfers are great for “Atlantis: The Lost Empire”, which really looks clear and the colors are beautiful. “Atlantis: Milo’s Return” is not the greatest, especially since it really has that made-for-TV feel to it. Just doesn’t work for me overall. Both films come stocked with a standard, yet impressive DTS-HD Master Audio 5.1 audio tracks, same thing applies here also as the video transfer. The first film sounds stunning and very epic, while the sequel does not reach that same level at all. Decent but no wow factor.

The best thing this Blu-ray has going for it that “The Emperor’s New Groove”/”Kronk’s New Groove” and “Lilo & Stitch”/”Lilo & Stitch 2: Stitch Has a Glitch” doesn’t is that it actually has special features on the Blu-ray disc. There is an audio commentary on the first film from producer Don Hahn and directors Gary Trousdale & Kirk Wise.  I actually thought it was quite interesting and informational. “The Making of Atlantis” is a sweet hour long extensive ten-part documentary, which covers all aspects of the production. “The Lost Empire Deleted Scenes” includes four unused scenes. There is one deleted scene from “Milo’s Return” running thirty-two seconds long…really? Lastly there is “How to Speak Atlantean” as a faux news reel, “Atlantis: Fact or Fiction?”, which is fun for the kids and Theatrical Trailers included.