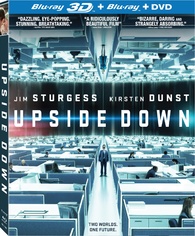 I am sucker for anything sci-fi and set in an alternate or futuristic reality.  When I read the premise for “Upside Down”, I was instantly hooked.  I thought it was  extremely originally, clever and very thought provoking.  Unfortunately, these kinds of films are not very marketable to the mass. As always Millennium Entertainment has stood up and given this film a proper release.  I have to admit, I was hoping it was going to be good but I thought it was actually pretty amazing. Definitely one of the most visually amazing films I have seen this year! I found myself very engaged with the film, its characters and got swept into the upside down world that was created within the film.  Highly recommend seeing this, especially in 3D!

Our leads, Kirsten Dunst and Jim Sturgess, give great performances, especially Sturgess who really let’s it all out (like usual) for this role. He has been on my radar since “Across the Universe” and has consistently impressed me especially last year with “Cloud Atlas”. The two leads have great chemistry between each other. Since the film is about their forbidden romance, the two of them makes it feel very believable and has your routing for their success. Timothy Spall, who is best known for his role of Peter Pettigrew in “Harry Potter” series is also equally awesome as well in his supporting yet important role..

“Upside Down” talks place in an alternate universe where two intertwined worlds not only exist but also have opposite gravities. Adam (Sturgess), who comes from the lower (class) end of the world, finds the girl of his dreams, Eden, but she is upside down from him. Get it Adam and Eve? After an event happens and they lose touch for 10 years, Adam tries to find a way to win her back even if she is practically in a different world.  The question is posed to our two lovers… “what if love was stronger than gravity?”

Millennium Entertainment  is releasing this film in a 3D + 2D Blu-ray & DVD combo.  I am psyched to see them give this film a 3D Blu-ray release since it is a very visual film and it really lends a lot to the extra dimension. In fact this wasn’t even released theatrical in 3D, which I believe was big mistake. There is a lot of great extras depth added to this film. When I was watching this film I actually believed that I was in this world.  When the world’s turned upside down, I felt like I should be turning my head around. I also couldn’t help but relating back to “Oz The Great and Powerful” which cost $150 million more than this film and looked completely fake as shit.  These visuals were absolutely amazing and deserve the attention.

In terms of quality “Upside Down” also looks great in 2D but just misses the opportunity for the great added depth and visual effect. The 1080p transfers are very impressive.  The 3D transfer tends to feel a little darker but I feel that it only added to the blue-hued futurstic world. The Dolby TrueHD 5.1 audio track is nothing short of epic. I kept thinking to myself when I was watching this film, “who the hell scored this?”, since the scores feels so big. Kudos to Benoît Charest, who also composed “The Triplets of Belleville”. His score is well represented on this Blu-ray.

The special features are quite impressive like the film.  They are also all available in 3D, which is not necessary for their context but still neat.  “The Making Of” is a great look into the production, which is very well done and a must watch if you liked the film. There are a few short Deleted Scenes included and an storyboarded alternate opening, called “History of the World”. Sticking with storyboards, there are about two dozen conceptual drawings including as well as storyboard  from the film’s finale and a few others. Since the film is very visual there are also a new previz shots for the Sage Mountain sequence, the Office and lastly the Final Shot – all with commentary from Juan Solanas takes viewers throughout he process of making a shot.