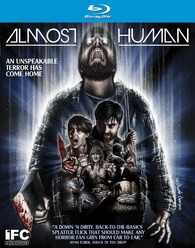 When you see the amazing poster for “Almost Human”, it is simply impossible for any horror fan to say “No” this checking this film out. Unfortunately after the opening scene, this film falls terribly apart and really loses its momentum. I can honestly tell you that we are going to see great things from writer/director Joe Begos for sure. But “Almost Human” suffers from a terrible cast and no budget. If they could have got some money behind this, they really could have hooked this film up good. There is some good gore for those horror hounds and it feels like an old school slasher but I was overall left quite bored.

Official Premise: Two years ago, Mark Fisher (Ethier, Contracted, Scavengers) disappeared from his home in rural Maine in a brilliant flash of otherworldly blue light. His friend Seth Hampton (Skipper) was the last to see him alive. Now, Seth is having disturbing premonitions that Mark has returned as something other than human. When grisly, violent murders start taking place in the community, Seth and his girlfriend Jen Craven (Leigh, The Last Halloween) discover that Mark is indeed back, and that there is something terribly evil inside of him.

In the special features department, there is a commentary track from writer/director Joe Begos and Josh Ethier. There is also another audio commentary track from Begos and Ethier (again) along with Graham Skipper and Cory Lockman. There is a feature-length making of behind-the-scenes look into the production. There is a on-set visit with Graham Skipper. There is the short film called “Toxin”. Lastly, there is a theatrical and alternate trailers, vintage TV spot and a photo gallery. This is a rare film where the special features are worth watching more than the film itself. I did enjoy the film more honestly with the commentary track.