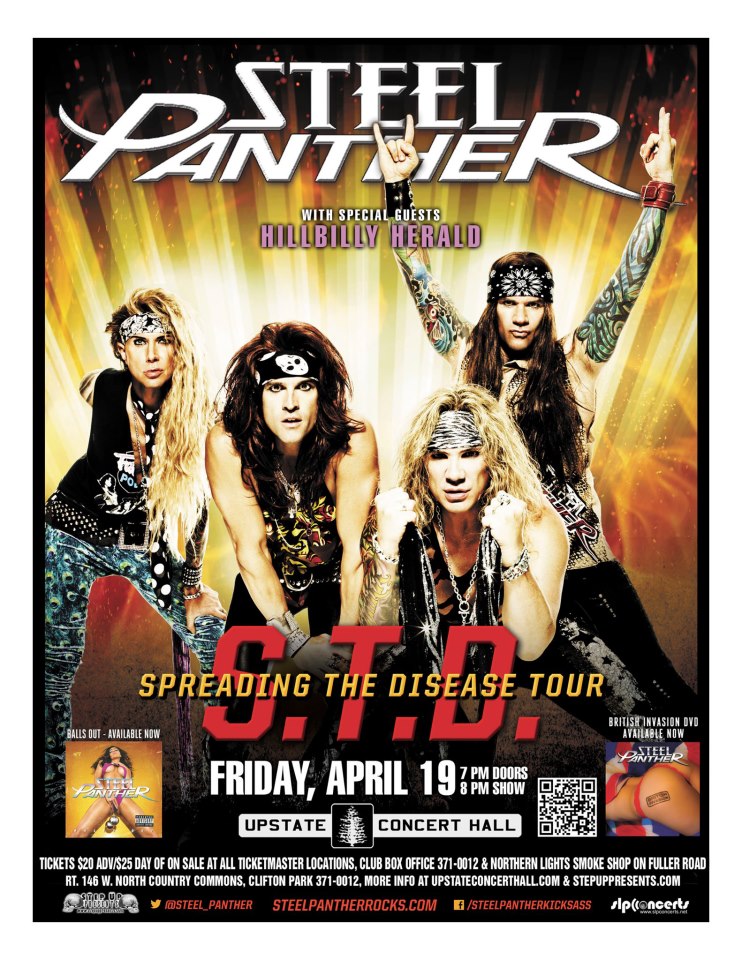 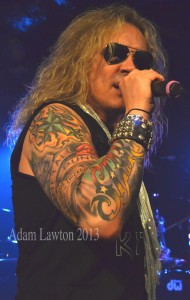 brought their own brand of hair metal to the intimate Upstate Concert Hall. The band along with special guest Hillbilly Herald are currently on the road for Steel Panthers first full length tour which is being billed as the “Spreading the Disease Tour” (STD). Both bands proved that this is a legitimate tour and even though Steel Panthers on stage antics and subject matter is anything but serious the group’s performance was top notch.

Elkhart, Indiana’s own Hillbilly Herald would kick off the night with an energetic sound that could be described as AC/DC meets ZZ Top. The bands 45 minute set was a mixture of original material and a few notable covers that  included a unique take on the John Denver classic “Country Road”. The band received a large amount of praise from the near capacity crowd and seemed to be a fitting act for the opening slot. After a brief intermission the house lights would come down and the intro from the bands most recent album “Balls Out” blasted over the PA. Guitarist Satchel 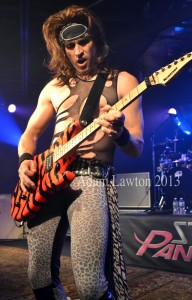 would take the stage first launching in to the opening of “Super Sonic Sex Machine”. Lead singer Michael Starr worked the crowd like a pro paying especially close attention to several scantily clad women in the front row. As the night moved on the band treated the crowd to songs off both of their albums such as “Asian Hooker” and “Turn Out the Lights”. In between songs the band would take comedic jabs back and forth at each other while propositioning the women in attendance with sexual explicit banter.

It was great to see the band which has been around since 2000 finally take their show outside of their weekly Los Angeles and Las Vegas shows. The band’s look is straight out of 1985 but the performance is fresh and fun. Though it may not be a show you want to take your children to it’s definitely a night full of great music and laughs. Don’t let the bands look fool you as they are all accomplished musicians who despite their wild/funny personas are serious players who like to go out and have fun while entertaining the crowd. If you have a chance to check out the “Spreading the Disease Tour” make sure to get your tickets early, tease up your hair and throw on your favorite pair of spandex as this is a tour you won’t want to miss.