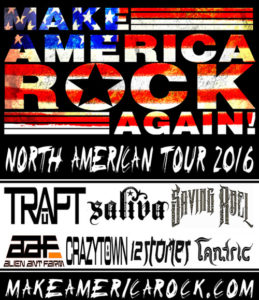 Trapt, Saliva, Saving Abel, Alien Ant Farm, Crazy Town, Tantric and 12 Stones all made their way to the quaint town of Big Flats, NY on September 16th as part of the “Make America Rock” tour. Despite the tour package boasting some of the biggest artist of the early 2000nds the night came up short making for a rather dull concert experience.

Taking the stage first was the group 12 Stones. The group probably had one of if not thee toughest spot on the bill as concert goers were still filing into the spacious outdoor venue and also waiting in line for their choice of tasty beverages so, needless to say the attention at this time was focused elsewhere. Despite these obstacles that band still appeared to give their all and should be commended for their efforts. Next up was the group Tantric whose song “Breakdown” dominated the airwaves in 2001 and still receives regular play to this day. The groups set seemed to be plagued by technical difficulties making vocalist Hugo Ferreira hard to hear almost the entire set. Luckily the 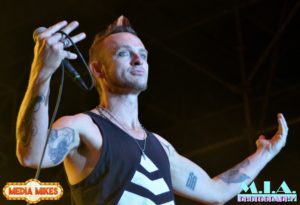 technical setbacks did little to kill the crowds growing momentum though and the group forged ahead with their 5 song set. Crazy Town would be up next and surprisingly I thought had the best set of the night. Not only did the group display a tremendous amount of energy but they also appeared extremely well rehearsed which made their set undoubtedly my favorite of the night.

Alien Ant Farm was next on the bill and put on a performance that sort of had people scratching their heads. The bands front man Dryden Mitchell awkwardly milled about the stage while his band mates remained relatively immobile. Even during the bands hit cover of Michael Jackson’s “Smooth Criminal” the band seemed less than interested in being there making their 7 song set list about 7 songs too long. The latest incarnation of Saliva which now consists of Wayne Swinny, Paul Crosby, Bobby Amaru and Brad Stewart would be up next and easily had the second best set of the night. Despite having a soft spot for the bands original line up the current bands configuration did a solid job as they blasted thorough their list of hit songs which included 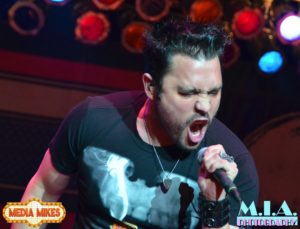 “Always” and of course “Click Click Boom” which closed out the nights set. Mississippi natives Saving Abel would be up next and put on a performance that sort of followed suit with the evening as it came of flat and at times a bit forced. Vocalist Scott Austin’s attempts to be the “crazed front man” were pretty lame and did little to entice the crowd who by this point of the night were running on fumes. However they did come alive briefly for the bands performance of the hit song “Addicted”. Trapt would close out the night this evening which in my mind was a bit questionable however, it was what it was and away the band went with a set that was just as flat as the previous bands performance. Of course the crowd appreciated hearing “Head Strong” but other than that both the band and the remaining crowd seemed to force themselves through the remaining moments of the night.
When a lineup of bands that all had their fair share of hits and exposure join together for a tour after having been away from the public eye for some time you would hope that each of the bands come out swinging and with their best feet forward. Sadly that was not the case for the “Make America Rock Again” tour. Despite solid performances from Crazy Town and Saliva the remaining 5 act seemed to do little for the medium sized audience who ventured to Big Flats making me wonder if everyone had gotten their money’s worth. I can’t say I would be down for checking out another show however if you want to throw caution to the wind and a little cash as well the tour will be out on the road through mid October for you to check out.