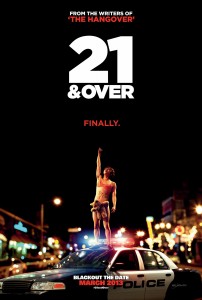 The first thing I did when I walked out of “21 and Over” was go double check the movie poster in the lobby. No, I hadn’t misread it. In big letters it proclaimed that “21 and Over” was “FROM THE WRITERS OF ‘THE HANGOVER’” I thought for a few minutes…maybe it’s the writers of the 1973 Swedish film, “Hangover.” Or perhaps it was written by the fine people that created the 1950 Van Johnson/Elizabeth Taylor film “The BIG Hangover.” But no, next to “written by” are the names Jon Lucas and Scott Moore (they also direct). Those are the names of the men credited with writing the very funny 2009 “The Hangover.” Wow. Looks like they used up all of their funny four years ago.

The story, as it is, consists of three friends getting together after some time apart to celebrate the 21st birthday of one of them. Miller (Teller) is the obvious “fun” one, Randy (Keltz) more laid back. Both of them have come to visit pal number three, Jeff Chang (Chon). I should point out here that Jeff Chang is always referred to as Jeff Chang, even if it’s obvious that he’s the only “Jeff” or, for that matter, “Chang” in the room. While Miles and Randy want to party, Jeff Chang (damn it, now I’m doing it) begs off, citing a very important job interview he has in the morning. It seems that Jeff Chang’s father has set up the interview and has insisted his son not embarrass him. After much persuasion Jeff Chang agrees to go out for “just one beer.” Yeah, right.

I can’t remember the last time I laughed at the trailer of a film more then the entire film itself. You may have to go all the way back to “Schindler’s List” for that to have happened. Though, in my defense, I should point out that I was laughing at a story a friend of mine told before the “Schindler’s List” trailer ran, not the actual trailer itself. When I say “21 and Over” is uneven that’s pretty much the best I can offer it. What it basically is is a jumble of unfunny jokes and circumstances strung together with really no rhyme or reason, nor common sense. As their night progresses Miles and Randy learn that Jeff Chang, who’s in pre-med, gets tutoring in basic science, has been kicked out of his dorm for attempted murder and is currently carrying a handgun. Wow. You’d think that real friends would stop the partying and find out what’s been going on in Jeff Chang’s life, not playing beer pong or infiltrating an all-Latin sorority house.

The characters themselves are also too broadly drawn to care about. Teller, who was the best part about the remake of “Footloose” (he was Willard) seems to be trying to channel John Cusack, circa 1985 here. It doesn’t work. Keltz is equally at a loss as Randy. Only Chon get’s off lightly, mostly because he’s unconscious for parts of the film and doesn’t have to perform. I don’t blame the actors, I blame the script. Perhaps Lucas and Moore should have given Todd Phillips a chance to work some magic with it like he did on “The Hangover.” Oh well, guys, better luck next time.