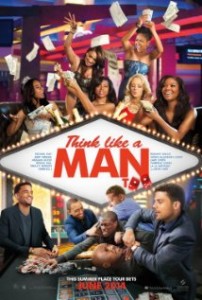 Remember when the “Brady Bunch” went to Hawaii (the episode was called ‘Hawaii Bound’)? It was one of those television moments that wasn’t meant to advance plot or propel the Bradies as characters, but stood as a disposable piece for fans of the cheery 70’s family. It takes a cast, fans know and love, and drop them into an exotic location to create their own shenanigans with complimenting inside jokes that only loyal fans would understand. “Think Like a Man Too” could definitely be lumped into that category since it’s an unnecessary sequel to 2012’s favorite group of couples. This time they’re heading to Vegas for another serving of chuckles and groan generating gender stereotypes.

I guess I should have prefaced everything with: I haven’t seen “Think Like a Man”. I blindly went in to this sequel with the notion that I didn’t need to see it to really understand anything about the mess of adorable characters. You could say I know about as much about these people than Steve Harvey has well thought out critiques of human relationships. I shouldn’t be too mean to the current host of the “Family Feud” since he is an incredibly charming guy, but when I see this is based off a relationship advice book of his called “Act Like a Lady, Think Like a Man”, I roll my eyes at the man who’s had more divorces than I’ve had marriages.

This movie follows four couples that I don’t feel like meticulously retreading over. All you need to know is that the main couple, Candace (Regina Hall) and Michael (Terrence J), is getting married in Sin City and have brought along their quartet of coupled friends, each with their own separate problems. One couple has to worry about the male’s reputation as a sexually deviant freak, another is conflicted about their own independent careers paths and the final two couples have problems…I think…not really. Then the eleventh wheel of the group, Cedric (Kevin Hart), is going through a messy break-up and ready to loudly hit the playing field again. You can understand my predicament on recapping a sitcom season worth of subplots.

I know I’ve ragged on Hart in the past, but this time he’s well cast, give or take a few moments where the creators are clearly cashing in on his loud squealing. Instead of being the Chris Tucker for millennials, he’s allowed to be the pompous, yet lovable short guy with funny quips and a dash of sarcasm. While he’s not a part of the emotional drama, he’s definitely a recurring centerpiece to comedic scenes, which just implies his relevance in today’s pop-culture. I actually like every actor and actress in this movie despite a couple of cheap celebrity cameos and “Oh, that’s what’s their face from that one thing.”

Hart is also used as the narrator to this movie, which I could have easily done without. The narration adds nothing new or sets anything up since the proceeding scenes basically tell the audience what the voice over just stated. I don’t think that shows much faith by the writers in the intelligence level of their audience. That might also be why some of the so-called advice in this movie comes off as sophomoric with a masculine-leaning bias. I will however give credit where credit is due. The archaic view of “women need to be ladies” is trashed on in lieu of a more modern idea that women can have the same “Hangover”-esque escapades and not be called derogatory terms in the process.

I chuckled and was surprised by some of the witty jokes that were spit out by some of the actors. I feel like director Tim Story is just inches away from making a movie I finally can recommend, but “Think Like a Man Too” feels more like fan service instead of something a mainstream audience can pack in and see. If you saw “Think Like a Man” and loved it, I can’t stop you from seeing this sequel, but to those who haven’t seen it, stay home.