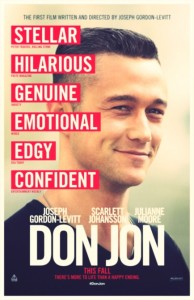 This film is a very impressive writing and directing debut by Joseph Gordon-Levitt. He captured a lifestyle of men that is becoming somewhat of a common problem in America and across the world. With easy access to the internet men are just a click away from beautiful, sexy, easy women. This gives men delusions of how woman act and that you can still find that one girl that will do anything but you can take home to your parents and, more importantly, to church. He details this struggle very well which makes me wonder…how much of this story is fact and how much is fiction.

The film not only shows the struggle of an addict and his consequences, it follows his story to the end. Deceit in a relationship comes with consequences. With consequences a great lesson is generally learned. Though you may have lost that love you had the lessons learned are much more important. You love and lose but you will love again.