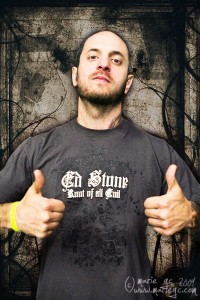 Tim Williams in the lead singer in the Long Island-based hardcore band Vision of Disorder. I have been a fan of these guys since day one and were a major influence in my taste of music. The band released their latest album “The Cursed Remain Cursed”, which was the first studio recording in over a decade. The album is also one of their best to date. Media Mikes had a chance to chat with Tim about the album and the how the hardcore scene has changed over the years.

Mike Gencarelli: Tell us about the inspiration behind “The Cursed Remain Cursed”?
Tim Williams: Long story short, it was a long process…which is fine. We took our time. A lot of the inspiration both the songs and the lyrics were based on how I was feeling during the time. Things were a little hairy in my life for a while. So I was dealing with that and then also the disbanding of Bloodsimple. I was looking forward to just getting in the studio, taking my time and not having to rush out on the road right away. Just kind of settling down a little, you know? Things were really busy for a long time and it was good just to say in one place and make some music.

MG: It’s been 11 years since your last studio album; how do you feel that the sound for VOD has evolved in that time?
TW: I think we have changed as people and musicians. We are a little wiser and know what we want and know how to get it. I think going when we went out own way for that time and made it on our own terms really helped also. I think the biggest difference this time around for VOD is that we are more mature and know how to handle the business better.

MG:The tracks on this album are just as hardcore matching the self-titled album, you have any difficulty keeping that level of anger through the lyrics?
TW: No, not at all. There is plenty to be mad about [laughs]. There are also plenty of things to talk about in the world. The things that I draw my lyrically content from are very present and have not run dry from that well. It is difficult to do well, so you need to take the time to make it what it is. Just pushing out the first thing in your head and holding it. So it is not hard to conjure it but it is hard to make it good.

MG: What was your biggest challenge heading into the studio?
TW: My biggest challenge was to try and not make the same mistakes. I wouldn’t go as far as to stay relevant but to make really good music and not fall back on the stuff that we have already achieved.

MG: How was it working with producer Will Putney on this album?
TW: It was great. I have done work with Will before back on Bloodsimple. He engineered their second record. VOD recorded about 3-4 demos for this record to see how they sounded. We did a demo with Will and that one just destroyed every other demo we did. It just captured what VOD should be. We went back and forth with a couple different producers. Long story short, based on the connection I had with him, I just kept pushing for Will over and over. Finally, it all worked out. It couldn’t have been a better choice because the proof is in the pudding and Will was a very intricate part of that record. He really just let us be VOD and that is why it worked. Will knows how the band is supposed to sound and I feel that we did it right.

MG: Any B-sides that didn’t make it onto this album?
TW:We wrote a lot of songs for this record. There was a lot that we didn’t even bring to the pre-production. There was one song that actually was tracked but  there was so much shit I had to get done and I didn’t even listen to it. Everything was going so good and I didn’t want to waste 2-3 days on a new song, when the other shit was so great. That might come out some day…you never know. 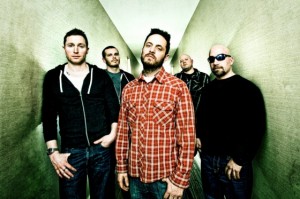 MG: How does you feel that the hardcore scene has changed since you started?
TW: It has definitely changed. How do I feel? It doesn’t really matter…it changes, you know? It will change with or without me. I feel fortunate that VOD was around when it began – or I would say was morphing into a different thing, like from the 80’s into the 90’s. We were very fortunate to have been involved with the scene in the 90’s with bands like Madball, Dark Side, the original Life of Agony, Sub-Zero and all those bands that were really hardcore. To be a part of that and actually succeed was a cool thing. Seeing VOD be able to come back is even better. It has really been a crazy ride.

MG: We going to have to wait another decade before we get more material again?
TW: This album is still new, obviously. But yes, we will like to do more records down the line. We are just going to continue on and probably crank out another one and just keep going. Why will we stop right?