Richard Sterban is best known as the bass singer for the country and gospel quartet The Oak Ridge Boys since 1972. He started off his career singing with the King of Rock and Roll, Elvis Presley. Going 40+ years strong, the band is currently touring around 150 days a year and shows no signs of slowing down. On tax day, April 15th, the band is releasing their first live album “Boys Night Out”. So if you have any money left over, I would highly recommend checking it out. Media Mikes had the privilege to chat with Richard about the live album, singing with Elvis and non-stop touring.

Mike Gencarelli: Tell us about the new album “Boys Night Out” and why a live album now?
Richard Sterban: This is something that our fans have wanted for a long time. Our fans always tell us that they love our studio albums but that live and in person we are so much more exciting. So we decided that it was time to capture that excitement on a CD. It seemed like every time we were going to try and record a live album, we would get an opportunity to do a new studio album whether it would be a new country album, Christmas album or Gospel album. So we always put the live album on the backburner, so to speak. Last year, we just decided we were going to record some of our shows live. We ended up recording eleven live shows and between all of those we chose out what we thought were the best cuts that would describe a live Oak Ridge Boys show. I think it turned out really well. 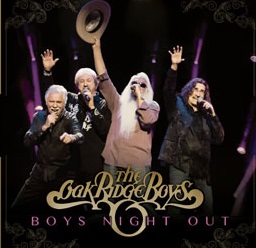 MG: How much planning when into picking the playlist for this album?
RS: There were certain songs that we felt had to be included, “Elvira” for sure and “Thank God for Kids” was another. Then we listened to the input of Cleopatra Records, who we just recently signed with. It was a combination of their input and what we wanted. We just put our heads together and came up with fourteen songs. I feel that it is really a great example of a boys night out with The Oak Ridge Boys.

MG: What was it like starting your career singing with Elvis? How do you top something like that?
RS: I have had a pretty excited life and career. For two years prior to joining The Oak Ridge Boys, I sang with JD Sumner and the Stamps Quartet and I had a chance to sing with the King of Rock and Roll, which was really exciting. I got a call one day that the bass singer from The Oak Ridge Boys” was leaving and they wanted me to take the job. So I had to make a very important decision. I loved singing with the King of Rock and Roll…lip-singing with Elvis but I joined the Oak Ridge Boys and I have gone on to bigger and better things with them.

MG: I know that you also have a book out that also covers your early years with Elvis and through your amazing career with The Oak Ridge Boys.
RS: Yes, I do have a book out called “From Elvis to Elvira”. It is my life story and is filled with tons of great stories. It is available on my personal site RichardSterban.com, Amazon.com or catch up with us at a show and I will have them with me to sell and sign if like. 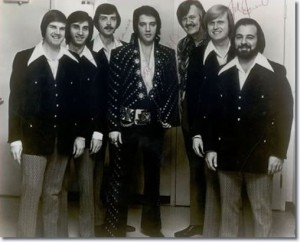 MG: Over 40 years with The Oak Ridge Boys, what continues to drive you?
RS: I think it is several things but the most important is that even after 41 years we still enjoy doing what we do. We look forward every night to getting up on that stage and taking our music live to our audiences. We are still having fun doing this and I think that is the most important. We also love the creative process of going into the studio and creating new music. So that is what keeps us going.

MG: Why do you think that generations of fans are still following you guys today?
RS: We pride ourselves on that. There is no question that we have gotten older and our core audience has aged along with us. But we are really considered family entertainment. There is something for every family at our shows whether you are a grandpa/grandma or a young kid. We encourage parents to bring their kids to their show as well. Our shows are definitely fun for the whole family.

MG: Which of your songs really gets you going the most when you are on stage?
RS: Naturally, I would have a tendency to levitate to “Elvira”. That is our biggest song and everyone has to hear “Elvira” at our shows. We have tons of other really great songs. I think one of the most meaningful songs that we ever recorded is “Thank God for Kids”. We do that song every night and we look out in the audience and see parents hugging their kids and people holding hands. It is pretty emotional. Now at our age, when William Lee Golden sings this song at the end he says “Thank God for Grandkids too!” [laughs] We are all grandparents now and I hate to admit this but last week I became a great grandfather as well, so that is definitely something amazing.

MG: Can you reflect on music today in the age of Facebook, Twitter and other social media?
RS: We try to pay attention to that. Duane Allen is on Facebook all day and keeps the fans posted there. Joe Bonsall, our drummer, is on Twitter all day. There is an advantage to being in a group since you can spread the responsibility out. I am not a big social media guy. I am on Twitter though. I spend my time doing the old fashion thing, like we are doing right now. I talk to

newspapers and radio stations all the time. So that is the function that I serve. In this day and age, we have a lot of ways to get the news out and we are really embracing it.

MG: You guys never seem to rest; tell us about your non-stop touring this year?
RS: We average about 150 days a year on the road. You can tell by looking at our schedule this year going to be no exception, in fact probably more. But it is what we love doing. We look forward to each night and sharing our music with our fans and that is why we are still going strong. Touring is a big thing for us and we love getting out there and doing it. Health is probably the key to our future. I think as long as the four of us continue to enjoy good health then we are going to keep getting out there and touring.