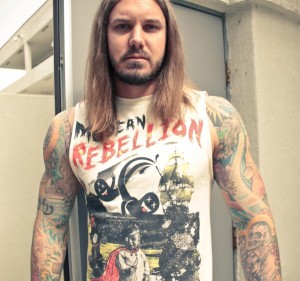 Tim Lambesis is the vocalist for the metalcore group As I Lay Dying. The group released their 6th studio album titled “Awakened” in September of 2012 after spending the summer performing on the Rockstar Mayhem Festival. Tim’s side project Austrian Death Machine is set to release their third album titled “Triple Brutal” and with the help of indiegogo.com the group is offering fans once in a life time chances to help make the new album a reality. Media Mikes spoke with Tim recently about the upcoming release and found out just how dedicated he is to this record and the fans.

Adam Lawton: How did Austrian Death Machine originally come together?
Tim Lambesis: I wanted to do something that would be light and fun. There are all these great Arnold Schwarzenegger one liners from movies I grew up watching as a kid that I thought would make great song lyrics. The project really started out as more of a joke. I started writing the music and things just began coming together. We have this sort of cult following now which is pretty cool.

AL: In the past you have been responsible for the majority of lyrics and instrumentation. Was this still the case for the new album?
TL: With this being our third release now I kind of wanted to mix things up. I wanted to bring in friends and have them work on various songs. Most of the songs on the new album have been co-written which I think gives the record a more diverse feeling. There are a couple of tracks on there where I did things the old way which had me playing all the instruments and doing most of the vocals. Having those different people come in I think has made this release the best. 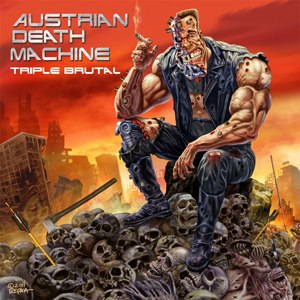 AL: I assume things were a little less stressful then for you this time around?
TL: It was. The thing is that even though I wasn’t doing as much song writing I was doing a ton of coordinating. Getting everyone together took some work. We actually are still working on the solos as we speak. Once those are completed we will be able to start the mixing process. I sort of traded one stress for another.

AL: Did the recent resurgence of Arnold Schwarzenegger in films influence the new album at all?
TL: That was definitely one of the motivating factors. We kind of let the project sit for awhile after putting out 2 records. Fans of those records were always asking me when new material was going to be coming out. That is what made me decide to get things up and running again.

AL: Can you explain your involvement with indiegogo.com?
TL: One of the reps for the site had gotten in touch with me and asked if I would be interested in doing something with them as Austrian Death Machine hadn’t done a new album in awhile. Fans of this band are real diehard fans and I thought doing something like this would give those fans more of a direct connection with the group. We have come up with some really special perks that probably wouldn’t happen when working on a normal record.

AL: Can you tell us about some of the unique packages that are available?
TL: We threw a bunch of stuff out jokingly and we actually ended up using some it. It’s one of those things that will get people talking and keep things interesting.  We did have to limit some of the packages like the one where if you pledge $5,000 I will tattoo your name on my ass. That one is limited to two. One on each side will be the maximum. I came up with about 20 initial ideas and brought them to the guy at indiegogo.com I am working with. We narrowed it down to the best ones  and then we fine 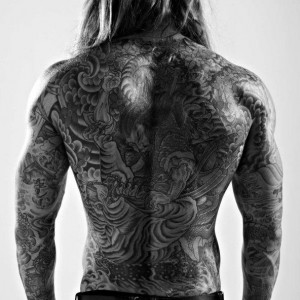 AL: Are there plans to tour in support of the release?
TL: That sort of depends on a couple things. First we have to see how the pledging campaign goes. We still have quite a few days left on that. If there are funds and the means to do a tour we will definitely be out there. The shows in the past have always been a fun time and the guys who play with me on those dates are always asking if we can do more shows. It’s one of those things where it’s hard to put together shows when I am gone so long with As I Lay Dying. If the opportunity becomes available I would love to do it.

AL: Has As I Lay Dying confirmed any dates for the coming Spring/Summer?
TL: We are getting ready to release the info for a tour that is going to be really cool. That I think starts in May sometime. After that most of our summer will be spent over in Europe doing festivals.

To help support Austrian Death Machines new album “Triple Brutal” and get your hands on some really cool limited edition stuff head over to http://www.indiegogo.com/projects/336354/ and pledge now!