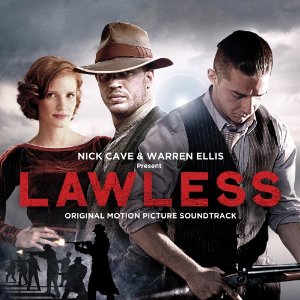 Nick Cave & Warren Ellis have collaborated on many films including “The Proposition”, “The Assassination of Jesse James by the Coward Robert Ford” and “The Road”. They all seem to have the same feel to each of them, though all unique. The film is based on Matt Bondurant’s 2008 novel “The Wettest County in the World” and that novel was adapted into a screenplay by Nick Cave. The soundtrack is a nice mixture of original songs written by Nick Cave for the movie and performances by Country legends Willie Nelson and Emmylou Harris along with Grammy Award winner Ralph Stanley (O Brother, Where Art Thou) and Mark Lanegan from Screaming Trees and Queens of the Stone Age.

Nick Cave and Warren Ellis are best known for their work in the critically acclaimed rock band, Nick Cave and the Bad Seeds. Cave and Ellis mixed their original music with innovative vocal under the name of The Bootleggers, which was the band they formed for the project. After listening to this album on loop a few times, I did start to dig it a bit more, but I feel it still runs a little too short for my taste. Nonetheless, it definitely captures the essence of the film very well. It also has a real period feel of country mixed with bluegrass. I would actually recommend listening to it and THEN seeing the film, since it will definitely get you in the mood.

The track from country legend Willie Nelson was actually previously unreleased and packs a mean harmonica. There are two versions of Velvet Underground’s “White Light/White Heat”, one by Mark Lanegan and the other by bluegrass veteran Ralph Stanley. The two new songs that Cave and Ellis specifically wrote for this film was “Cosmonaut” and “Fire in the Blood” featuring versions from Emmylou Harris and Ralph Stanley. The album ends on an instrumental track called “End Crawl, which is a brave move but is a good close.