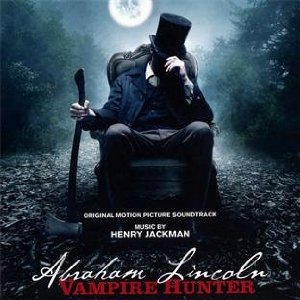 When you watch the trailer to “Abraham Lincoln: Vampire Hunter“, you find yourself with a nerdy smiling peaking out the whole time.  That is what I also found myself doing while listening to this score.  From the moment it starts it is super intense, scary and really thrilling.  Henry Jackman did a really amazing job on this score, easily one of my favorites from the entire year.  His score work is not the most notable featuring the likes of “X-Men: First Class” and “Puss in Boots” but it really packs a punch and delivers.  Honestly each track gets better and better as it progresses.

I am big fan of film scores, always have been.  I feel that the score is really the heart and soul of a film.  Especially for a film like this, if the score isn’t right the film will pay for it.  Jackson did just such an amazing job right from the opening track, which starts slow and gets haunting very quickly, all the way to the last track.  “Vampires”  is also a very interesting track, it really drags you in and doesn’t let go.  “The Horse Stampede” is also such a powerful track, I had to listen to it twice back-to-back. I am a huge fan of Hans Zimmer, who is also a mentor for Jackman,  you can hear his work come through here a little but that is not a bad thing at all.  Learning from the best is what I call that!

I think that this score will not only resonate to horror fans but also action fans as well.  The score also captures the film’s period in some tracks put also puts a modern twist on it with some kick-ass guitar riffs and powerful percussion. The only downside to the album is that it is a little short just coming in over 40 minutes but there still is a lot packed in during that time.  If you enjoyed this stylish horror/action film then you are going to love this album and it really brings the film to life and delivers a very entertaining and thrilling experience. I will definitely be keeping this score on loop for a few weeks easy.