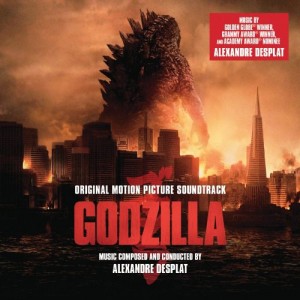 To walk in the footsteps of the giant monster Godzilla, you are going to have to wear some big shoes. Luckily, composer Alexandre Desplat does a great job of filling those big shoes and delivers one of the best scores of year. He is quite familiar with epic score as he handled the last two “Harry Potter” films, “Harry Potter and the Deathly Hallows, Part 1 & 2”. There is something about this score that has me locked in that after listening to for two days now I can’t get enough of it. When you think of an epic action film, you might think about this loud and in your face score but Desplat doesn’t do just that. He delivers some very beautiful music here that is soft and then he also brings the big action feel that is weaved in so well. “Godzilla” is easily one of my most anticipated films of the year and this score just makes me more and more excited to see it.

If you aren’t familiar with the new director Gareth Edwards, that is because he has only directed one film prior to this called “Monsters” in 2010. That film also had one of my favorite scores not just of the year but of all time. He introduced me to one the also first time film composer is Jon Hopkins and now I am a huge fan of his work as well. What I am getting at is that Edwards knows good music and he really picked a winner here teaming up with Desplat. Even though I mentioned this score is quite in parts, there was about a hundred musicians involved with this score and you can really feel the excitement that is generated from their performances on each track. When it comes to the busy summer season, I had a feeling that this score will be number one on my phone for months to come. Just a note, and this doesn’t mean to look down now, be warned that the track listings contain bit of spoilers for the film itself, so I would refrain from checking them out and just enjoy the tunes at least until you have seen the film!